To Blair: How Much Money Have You Made Since You Were PM? 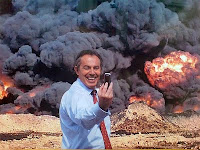 Kelvin Mackenzie was just asked on the Sky News paper review what question he wants to be put to Blair when he faces Chilcot. He was absolutely fuming - as I seem permanently to be these days when it comes to Liebour generally - and came up with a real doozy. He said he wanted to cut through all the non-oath, lawyerless BS and get to heart of things. The question, he said, should be: "How much money have you [Blair] made since you were Prime Minister?"
Last thing I read about this, it was something like £15 million - and still rapidly rising (and it's a figure that doesn't take into account his various nefarious business arrangements or his truly massive international property portfolio). He's the wealthiest ex-PM in modern history and he made that money simply because he fooled enough people into voting for him - three times. Exploitation of office? Personal agendas? Utter corruption? You get it all with Tony Blair - and all who supported (and still support) him. Alastair "David Kelly" Campbell, for one.
But Blair's clearly been well-rewarded for being Bush's Wormtongue. Lying to the British people and to parliament about some mythical need for "regime change" in Iraq was all he had to do. And he went about the task with truly nauseating alacrity.
Whatever millions Blair, in his insatiable greed, has scammed since being pushed out by his even-worse, long-term rival, Brown, every single penny of it is blood money. And the blood is the blood of hundreds of thousands of innocent Iraqis and hundreds of brave British soldiers. All sacrificed on the altar of an evil Labour leader's vanity, greed and megalomania. (With Brown, of course, I suppose you can omit the greed, but not the vanity and megalomania.) But, as a Conservative-voting relative of mine said to me just the other day, "It's really very simple...Blair is a war criminal."
The other upshot is that not-only Blair, but the entire rotten edifice that is the Labour party must never, ever be let off the hook for this terrible evil that their leader(s) perpetrated, and virtually all of them went along with. All the way to the first bombing raid and beyond.
It won't be forgotten or forgiven by an abused, humiliated and exploited British people for decades to come, that's for certain. And rightly so.
Posted by Jon Lishman at 1/27/2010 11:39:00 pm