The Times is reporting that Gordon Brown is "desperate" to sell Northern Crock, the state owned Geordie bank, the collapse of which signalled the beginning of the world financial crisis and Brown's Great British Superbust, before the next general election. Front runner? Parasitical, ubiquitous supermarket mega-company, Tesco. (They're the only firm in the UK with any money these days.)

Gordon Brown is keen to prove to voters that his rescue worked. If at all possible, he wants Northern Rock returned to the private sector at a substantial profit. Ministers say that he wants desperately to avoid a Conservative government taking the credit.

Whitehall officials told The Times that they “would not be surprised” if the bank were sold before the election.

The Treasury has drawn up a means of separating the good and bad assets to make it more attractive. Northern Rock holds deposits of £19.5 million and a mortgage book of £66.7 million. Some of the loans are so toxic that they are likely to stay in public hands.

Here we go again. Another day, another insult to our intelligence. Brown will let Tesco have the bank for a song in order that he can reinforce the serious delusion dreamt-up in his fevered imagination that he saved the world world's banks - and that he can stick it to the Tories.

Only, none of that is tr 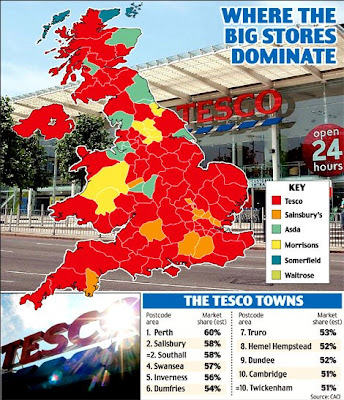 ue, is it? The latest lie-structure component of this arch pseudologue doesn't bear scrutiny (surprise surprise). He's rushing the sale for no other reason than to screw the Tories. But he's got even that iniquitous bit of reasoning wrong. He isn't screwing the Tories. He's screwing the taxpayer, as always, saddling the public with The Crock's huge dollops of sub-prime, bad debt and handing over the healthy mortgages (guaranteed by public money, remember, otherwise they would not exist), to Tesco. Tesco gets the cream and we end up covered in shit, as will always be the case as Brown continues to try to buy the election.

You see, Northern Crock still owes us £8.6Bn, according to the Treasury. The company isn't worth anywhere near that much dough these days. And Tesco will get it on the cheap anyway, especially now McMental's announced it: ("I didn't get where I am today by not getting everything on the cheap, Reggie, young Gordon," says Terry Leahy). Perhaps a cool billion for cash, then? Maybe more, but not much. We'll see.

But let's say it is that number. What happens to the rest of our loan, all £7 billion quid's worth of it? I'll tell you: nothing. Nada. Tesco certainly won't be paying it. It'll be sucked-up into a supernova-expanding PSBR, fiddled away by the expert liars Balls and Byrne, and we'll never see or hear anything about it ever again. That's seven billion big ones, folks. Gone.

Wake-up! That's the price for Brown trying to buy the general election for which we, our children and our grandchildren will have to pay. And the rest? The £7,000,000,000 hit for a written-off Crock loan is chump change for Labour. Rather sums them up, don't it? But the reality is much worse. We are into the terrifying, GDP-busting, Labour debt world of "trillions" now.

But Brown will do anything, anything, to win his first real election. 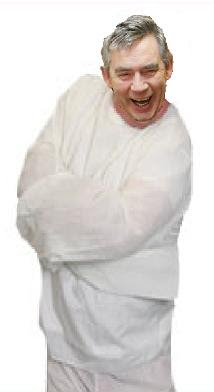 e's done a simple political calculation in what passes for his brain and for a dishonourable, untrustworthy, demagoguic, pseudological imposter like him, the sums add-up. If he wins, he can do what he likes (so he figures). If he loses, then sod the country, it can go bankrupt for all he cares.

In his twisted mind, we would deserve that agony simply because we rejected him. Knowing that, a paranoid person might suggest Brown, who 'doesn't do' elections, might find some excuse to suspend the democratic process.

Rest assured: potentially, Brown is definitely that dangerous. He hates democracy - and that lack of comprehension is the thing will finally finish him.

Riots in the streets? Cameron is dead right about that. That's where we are heading now. Brown will bring the country to its knees before he ever lets go.