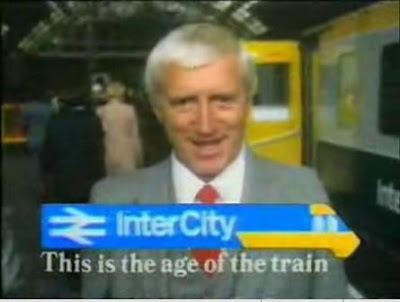 We learn today from the BBC that one of the post-Byers railway franchises is about to be renationalised. Its owner, National Express, which paid way over the odds for the loss-making East Coast lines in the first place in 2005, failed to win a credit note from the government to make-up for income shortfalls caused by the recession's impact on passenger numbers. The government instead has opted to take the company back into public ownership, presumably, but by no means certainly, because it's the cheaper option.

A one-off or part of a developing trend? Your guess is as good as mine. But this story is notable for at least one other thing, the hypocrisy of the (unelected) government minister behind the decision, "Lord" Adonis (another oily team-Mandelson member). He said:

I see. I take it banks aren't companies, then, are they? Priceless.

See, Labour idiots, it's all about consistency. Consistency denotes principle, which speaks to character. The conclusions to draw about Labour from that statement are surely obvious.

==Update==
Excellent Guardian article on this latest development here. And a reasonable Q&A BBC piece has popped-up here. Both clearly reveal that the government's shambolic franchise system is the chief cause of this latest calamity. They also imply that this could just be the beginning. After Mandelson's U-turn on privatisation of the mail, you'd be forced to conclude that Labour is definitely shifting on economic policy - to the left.
Posted by Jon Lishman at 7/01/2009 03:13:00 pm