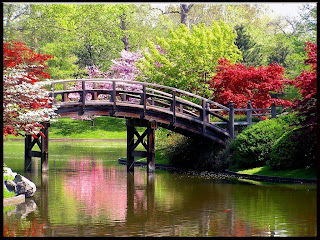 Springtime for Britain and Cameron
The Spectator's David Blackburn has written this revealing piece on the recent so-called Tory "wobble". Now, I didn't see it quite like that. Admittedly, there were some mixed messages over cuts, but ultimately, at least to me, it was not so much of a wobble as the inevitable backlash from the vast, almost universally leftish mainstream media when Cameron finally came out fighting on policy in January. The "right" media, that sees itself as some kind of torch-bearers of what they imagine to be "real" Conservative values, enjoyed fanning the flames, too: the ridiculously conflicted and editorially rudderless Telegraph does it from both sides at once these days. (It's quite novel, that.) But they - people like Simon Heffer - just don't like Cameron, and never will - mainly because he's not Margaret Thatcher, I assume. But he never will be Maggie. There's only one Margaret Thatcher - and Cameron, at least, knows that.

The point is that I certainly didn't feel that there was any improvement whatsoever in Incapability Brown's performance in January. Besides, even if there were some kind of progress made on his part, it was, past experience teaches us, bound to be torpedoed by his unmendable and all-encompassing shortcomings sooner or later. It was sooner. Having said that, in the end it was really Conservative policy that cut off his little dead cat bounce, and that should be a cause for celebration. Blackburn sums it up quite well:

The sudden devastation wrought on Labour by the Tories’ co-operative policy is evident in James Purnell’s waffling riposte. The validation of Tory economic policy, such as it is, from 20 leading economists and Sir Richard Branson provides a substantive alternative to the voluble, brilliant but wrong incantations of David Blanchflower. Cameron has returned to form at PMQs and Gordon Brown is reduced to giving lachrymose interviews to his friend, Piers Morgan. Resigned to defeat and ideologically exhausted, ministers hurl bland invective at Conservatives via Twitter. And even a Com Res poll indicates that the Tories are on the up, polling at 40 percent with an 11 point lead. The Conservatives were truly awful in January. They awoke to the New Year as staggering drunks; it’s mid-morning now and their hands have stopped shaking.

It looks like the "Conservatives were truly awful in January" idea has now become received wisdom. It doesn't matter, though and I suppose I can live with this little Mandelsonian propaganda triumph if I have to - mainly because January is over. The world and David Cameron have moved on. Only the bankrupt parliamentary Labour party and its dwindling numbers of diehard supporters don't seem to have grasped that. They still think it's Burns Night. Meanwhile, the Tories are resurgent, which is good news for everyone in the long countdown to the most important general election since 1979.
Posted by Jon Lishman at 2/17/2010 05:22:00 pm