Darling Puts The Boot In 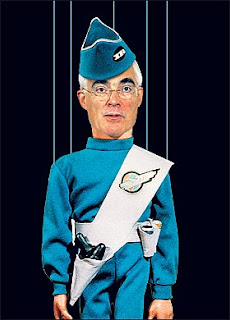 This pretty strange report in tomorrow's Telegraph, about an interview with Alistair Darling in which he claims that "Brown unleashed the forces of hell" on him for predicting the recession, suggests that at the very least, as Iain Dale says, he's just signed his own "political death warrant".

In an frank interview, the Chancellor said that people working for Mr Brown tried to damage him because he told the truth about the economy.

His remarks follow reports in a new book by Andrew Rawnsley that Mr Brown’s aides tried to undermine Mr Darling after the Chancellor forecast the worse economic downturn for 60 years.

In a Sky News interview, Mr Darling confirmed that No 10 worked against him. Mr Darling made his 60-year prediction in an interview in Scotland in the summer of 2008. Afterwards, No 10 aides briefed journalists that he had harmed the economy and should be sacked.

“Nobody likes the sort of briefing that goes on,” Mr Darling said, “the forces of hell were unleashed”.

It might sound like Darling is getting his own back for Brown's desperate disloyalty when the bust came, which he knew was all his fault and not Darling's, but I'm not so sure. If past experience is anything to go on, Darling, if challenged, will simply issue another humiliating "clarification" tomorrow and say that Brown has his "full support" and always has, clearly total rubbish though that now certainly is. But there was more in the report about Brown's henchmen, one of whom is still in business, bankrolling the Labour Party with the membership funds of the union he's been given to play with (Charlie Whelan):

Asked if he believed Mr McBride and Mr Whelan had briefed against him, Mr Darling said: “Of course you have people saying things.”

In a reference to Mr McBride’s resignation last year, the Chancellor added: “My best answer for them was: I’m still here and at least one of them is not.”

During the summer of 2009, Mr Brown planned to remove Mr Darling from the Treasury and replace him with Ed Balls, a long-standing ally.

The plan to oust the Chancellor brought a new confrontation between the two men.

But, as I said, I think Iain Dale is right, this could well be a step out of line too far given the current coverage Brown is (quite deservedly) receiving, clarifications or no clarifications. However, for the time being, I suspect it will be business as usual in the bunker, at least superficially, mainly because Darling, for all his genuine niceness, is as much of a politically self-interested jellyfish as any other Labour MP or minister.

But, in putting the boot in to Brown, Darling was not trying to perform some sort of a public service (perish the thought!). He was indulging a minor act of political revenge that merely provides us with further proof of the factionalism and mutual loathing that's always existed at the rotten heart of this Labour government, but especially so under the utterly disloyal political thug that is Gordon Brown. Darling offers conclusive proof - as if we needed it - of two things. One, that the facade of government unity under Brown, peddled by the likes of the slimeball Mandelson (et al), for reasons of personal aggrandisement and vanity, has always been just that, a complete myth. Brown's government is one of the most factional and dysfunctional of all time. Second, that working under Brown is hell.

Given that the future of the country is (or "was" - it might well be too late) at stake, this calamitous state of affairs at the top of the government is a lot more serious than a mere case of bullying. This is a major case of a man promoted way beyond his abilities (Brown or Darling - you pick). What's crystal clear is that when Brown is finally ousted, the kind of revelations that come out about his behaviour while in politics, let alone while in charge, will ensure that his historical reputation will lie in total ruins. Couldn't happen to nicer man.

No wonder he's so desperate to cling on - preferably, no doubt, without the inconvenience of the democratic process.
Posted by Jon Lishman at 2/23/2010 09:38:00 pm