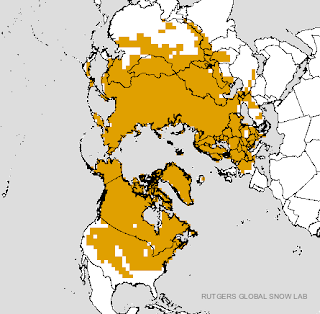 Watts Up With That is covering an AP story that's just broken about an extraordinary (possibly unprecedented) event: all 48 contiguous states of the USA (plus Alaska) currently have snow on them! Only Hawaii doesn't.

It is amazing, frankly. And combined with the fact that 1180 new snowfall records have been broken in the past week, (not to mention the catastrophic, statistic-busting winter that's being suffered all over north Asia, too), I simply can't believe the kind of abject, truly denialist, insulting, watermelon claptrap still emanating from the left media.

Now, I can tell you from experience that snow in Denver and its environs is unlike anything you have ever seen, snow-wise (unless you're from Siberia - or Colorado, I suppose), so certainly don't expect that Florida is currently experiencing the ten-foot-deep variety of snowfall that is pretty much the norm for the eastern foothills of the Rocky Mountains. But the very fact that Flordia (Florida!) has had any snow at all is truly remarkable.

Point is, if this is one of those "extreme weather events" we've been told about by the alarmists, then sure, I admit it, the climate is changing.