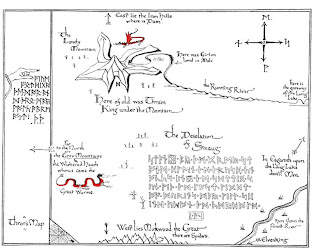 Dan Hannan has written a delightful post on his DT blog today, concerning Hobbits - or, rather, The Hobbit. He's been reading it to his young son and has found that Tolkien's verse and prose often far transcend the ordinary, but, strangely, we always seem to dismiss the whole, wonderful tale as a mere (admittedly magically escapist and fond) artifact of childhood. But it's so much more than that. Hannan explains how:

Tolkien understood the power of incantation: the way in which, as Philip Pullman puts it, reciting a fine poem makes you feel as if you were voicing words of power, chanting a spell. The story is filled with songs which follow the strict rules on metre and alliteration of the Old English verses which Tolkien loved, and whose force cannot be properly felt unless the lines are vocalised:

The dwarves of yore made mighty spells
While hammers fell like ringing bells
In places deep where dark things sleep
In hollow halls beneath the fells.

The prose, too, is studded with old Saxon words, and there is rhythm in even the most fast-moving passages. Try reading aloud the description of the fall of Smaug:

The great bow twanged. The black arrow sped straight from the string, straight for the hollow by the left breast where the foreleg was flung wide. In it smote and vanished, barb, shaft and feather, so fierce was its flight. With a shriek that deafened men, felled trees and split stone, Smaug shot spouting into the air, turned over and crashed down from on high in ruin. Full on the town he fell. His last throes splintered it to sparks and gledes. The lake roared in. A vast steam leapt up, white in the sudden dark under the moon. There was a hiss, a gushing whirl, and then silence.

Barely remember it as I do - I must have been no more than twelve years old the last time I read it (although, I did enjoy the ZX Spectrum game, too, I can just about recall!) - it really is gratifying to have Hannan revisiting and revealing it so well here to me-as-adult. And I'm grateful for it.

But what's more thoughtful and telling is not so much his appeal to grown-ups to give the story due credit as a piece of serious literature, but his invitation to understand its moral dimension, if it has one. Hannan, with some perspicacity in my opinion, identifies it and explains his discovery thus:

The only moral we can safely draw from the whole business is the one spoken by Thorin on his death-bed: “If more of us valued food and cheer above hoarded gold, it would be a merrier world”. Amen to that.

Given the behaviour of our perfidious, venal political classes, the woeful economic incompetence of our dear leader and his crew of merry morons, the 1.5 trillion pounds-worth of personal debt we've managed to accumulate as a society and the astonishing greed and stupidity of the world's money men, I could hardly imagine a more appropriate and timely sentiment. So, well done Dan Hannan but, as the debt default threat looms ever larger on the horizon, we may need to remember that it's no empty one: sooner or later, all of us are going to have to alter our priorities radically, and start to appreciate the simple things in life once again.