The True Cost Of The Labour Years? Unquantifiable 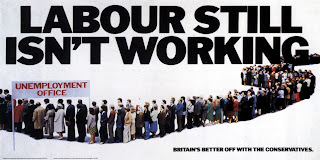 The British electorate trusted Labour to inherit the most stable and competitive economy in Europe and to invest wisely for the future. Yet over 13 wasted years our public finances have been squandered and our economy is in a dire state. The damage they have done is so extensive it is hard to quantify.

So writes John Major in an excellent article in today's Mail on Sunday. And who with half a brain could disagree with that? But, as he goes on, the gulf between reality and Gordon Brown's increasingly desperate political narrative nevertheless just keeps on relentlessly widening.

The Prime Minister feeds the public with a diet of nonsense, telling us that tackling the deficit is his priority, while promising increased expenditure for popular services. The disconnect between the Prime Minister's fantasy and the real world becomes ever wider.

And yet he continues to make claims that are easily contradicted by the evidence. How can trust possibly be maintained? And how have we come to this?

The former Prime Minister therefore raises three key points, which he does make some effort to answer in his piece, but not fully. First, he suggests that the vast damage caused to Britain in 13 years of this disastrous government will be very hard to quantify. Well, that could be the case - the damage is massive, in terms of our society, the law, education, productivity, the economy and so on and so on (ad infinitum - nearly) - but quantify that damage the Tories must, if there can be any hope of putting at least some of it right. The first thing they will have to do, once they have begun to bring Brown's debt chaos under control, is embark upon a great national audit, just to establish how deep in Brown's manure we have been left.

Second, he asks about trust. It's a good point, that, but it should be remembered that there is nothing wrong with parliament - never has been. The system of expenses, for instance, relied upon the integrity of MPs to function correctly. No one could have expected that fully 80% of those MPs had no integrity to speak of. Finding replacements that do, and then simply having a blanket cap on what they can be paid beyong their salaries in these years of austerity will provide an effective solution. As for Labour, its endless lies, spin and arrogant, shameless abandonment of the principles of ministerial and collective responsibility must be ruthlessly reversed by the next Tory government. Moreover, because of the vast assault on accountability - and the subsequent democratic deficit - by Labour with their creation of an enormous, extraordinarily expensive quangocracy, the third job for a Cameron government, if it hopes to repair the damage done to parliamentary democracy in this country by Labour, is to make these organisations democratically accountable (at the very least) and seek to abolish a large proportion of them. The former (democratic accountability) could be achieved, short term, by taking the 'N' out of QUANGO. Bring them under direct ministerial control; make them directly accountable. The 'quasi' bit, then, which has become meaningless under Labour, would then regain some sort of a truth value. Abolition and/or merging of these things could then be achieved more efficiently, and with fewer job losses in the long run, which is desirable in a broad sense. Ultimately, the savings to the taxpayer will be truly vast. A quote from wiki, for instance, on the subject:

In 2005 Dan Lewis, author of The Essential Guide to Quangos, for example, claimed that the UK had 529 quangos, many of which were useless and duplicated the work of others. In August 2008 a report by the pressure group the Taxpayers' Alliance, claimed that £15 billion was being wasted by the regional development agencies, quangos set up with the stated goal of encouraging economic development in their respective English regions.[7]

There's clearly scope for the abolition of, say, half of these so-called - in government circles - "NDPBs" (non-departmental public bodies), which cost a staggering £100Billion+ in 2008 to run, according to the Times, most of which was poured down the drain. It's not just about slashing budgets: there is a point of principle here, too, and it should be trumpeted by Tories from now on: not one pound of taxpayers' money should be spent without democratic scrutiny ever again. Otherwise, we will simply have more of what we have now, vast amounts of our money funding unelected special interest groups. It's not so much that we can't go on like that, but that we just bloody well won't.

The challenges for Cameron are staggering; the scale of the destruction wrought by a corrupt, corrupting Labour government almost unimaginable. And that's all without even mentioning Europe, or the many dodgy wars. If Cameron has the stomach for the post-Labour reconstruction job, then he's a far better man the me!