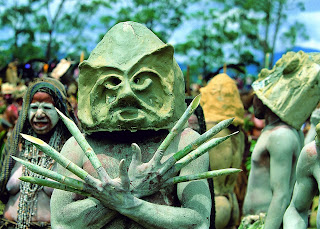 Interesting article in the Telegraph magazine this morning (yeah, I know - I said I'd never buy it again until they dumped Mary Drivel and Will Lewis, but, well, it's a bit like the Conservative Party: there is no credible alternative!) about Papua New Guinea. What a strange little island it is. But fascinating, nonetheless. And the native population's complex language, which contains a very peculiar form of pidgin called, I believe, Tok Pisin, is bloody funny. In a country of, incredibly, as many as 800 different languauges, this Tok Pisin, one of the most commonly used, is mainly influenced by English, German and Malaysian and is quite simply unique. Examples of common vocabulary are given in the article (and I've added a couple of my own that I nicked from this wiki piece on the subject): 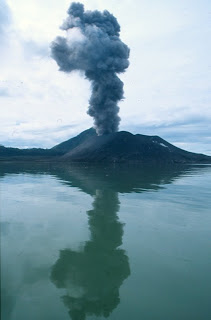 And the Prince of Wales is known as "nambawan pikininni bilong missus kwin," I'm sure he'd be pleased to hear (although I'm also fairly sure at least one word in that phrase would certainly be familiar to him - thanks to his dad).

The rest of the (exellent) article goes into aspects of Papua New Guinea (or "PNG" as it is apparently known) culture, landscape and society. I don't think the article is published online. Suffice to say, while pretty weird, PNG looks like an amazing to place to be a 'dim dim' for a few weeks. Whether you go to see Mt Tavurvur on New Britain, a highly active volcano, or want to pay your respects to the Mudmen of Asaro, it looks like 'bored' is something no one could be.
Posted by Jon Lishman at 2/06/2010 03:08:00 pm