Carbon is universally ubiquitous. It is the fourth most abundant element in the cosmos and the fifteenth most common on this planet. It's the basis of all life as we know it. Yet it seems that this elegant combination of abundance and vital significance will not stop human beings, in their endless pursuit of ever greater levels of folly, from basing an entire new economic model on "trading" the stuff. It reminds me of the Golgafrinchans in The Hitchhiker's Guide to the Galaxy, where, having crash-landed on a primeval Planet Earth, decide to use tree leaves as currency, only to discover soon afterwards that they had a serious inflation problem. Their solution? Why, burn down the trees, of course.

So you would think that this comedy science fiction is just that, comedy science fiction. It could never happen in real life, could it? Well, yes, it could. Anthropogenic climate change hysteria (it was anthropogenic global warming, but since the warming abruptly ground to a halt a decade ago, the goalposts were conveniently moved) drummed-up by discredited, numbskull scientists and then exploited mercilessly by leftwing misanthropists and 'financial engineers' alike in pursut of their own agendas, is producing its own version of leaf-trading. Both groups have something in common: while their ultimate goals might be different, they both really don't give a toss about the environment. All the traders really care about is money and all the loony Trots really care about is power. About people in general, they both care nothing.

Leaving the Trots to their own devices for a moment, in Private Eye's latest edition is an interesting article on the father of derivatives trading (junk bonds to you and me), Richard Sander. For those that don't know, derivatives, in their many various forms, are the things that brought the global economy crashing down a couple of years ago, (beginning, interestingly, with Northern Rock in Britain (it didn't 'start in America', as such, you see)). Just to put things in some kind of perspective, the entire market, if memory serves, was worth an wapping $500Tn in 2007, while the real villain of the piece, the CDS (Credit Default Swap), which was a trading invention that effectively rewarded the trader who held them with a payout should there be a default over a set period of time on a 'bundle' of mortgages, which were sold as a package, was $50Tn dollars before the sub-prime crisis went off like a nuclear bomb and plunged half the world into depression.

Well, Sander's at it again. This expert in magicking money out of thin air by trading in worthless assets is the main mover behind all the new bit of 'financial engineering' currently known as 'carbon trading'. Private Eye has done what passes in that magazine for an expose on him, though its typically MSM-style, schizoid editorial stance on all-things climate change means that it doesn't seem to be able to reach any solid conclusions about where this latest global financial scam will take us. Anyway, click on the image to read the article, or on the link above: 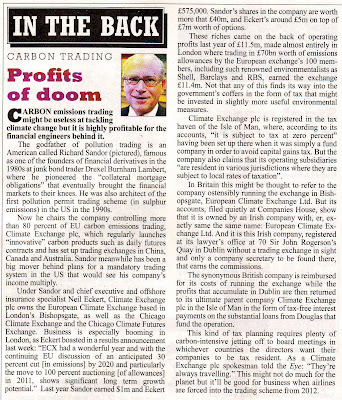 Whatever the ins and outs of how this thing's mechanisms are expected to work, a few things stand out in particular. First, the usual suspects are involved (RBS etc). Second, it stinks. What CNBC's Federal Reserve expert, Steve Leisman, called in late 2008, at the height of the crisis, a decade of 'fake growth' amounting to $40Tn, is about to happen all over again. A worthless commodity, in this case a commodity that doesn't actually exist - these are bets designed to offset the 'production' of carbon, or, more accurately, carbon dioxide - (at least with sub-prime, there was a real house lying somewhere at the bottom of it all), will be traded furiously in a market that some are saying will be worth $100Tn (Christopher Booker for instance) before this decade is out. And they are not wrong: one decade was all it took in the case of sub-prime junk bonds, once Alan Greenspan and Bill Clinton (and Gordon Brown in Britain, of course) had created the CDS bonanza for their banking buddies. Lehman et al over there; Royal Bank of Scotland, Bank of Scotland, Northern Rock et al over here. So long as the tax rolled in, no one in government cared. They certainly did not have clue-one about the forces they had unleashed with their vandalism of carefully created regulatory systems. Brown certainly didn't, hence the biggest exposure was in Britain. Within a decade, that market had jumped from a few hundred million in the mid-nineties to trillions by the time of what I consequently like to call 'Brown's bust'.

It's happening all over again, beginning this year. And there is nothing anyone with any political power will do to stop it. Why? Because of the propaganda that is fuelling the scheme's growth and the amount of egg on collective faces there would be should someone decide to hold his hand up and simply say, "Hang on a minute, do we really want to go down this road again?" So it isn't carbon capture we should be worrying about, it's media capture. It isn't money men like Sander we should be worrying about - he's just doing what he does best. It's the crooks in our own government.

It isn't climate change we should be worried about, it's the vast scale of the next bust, which will be inevitable if (or when) these immoral, undemocratic and economically retarded transnational carbon trading schemes are permitted to gain a grip on the world.

We do need alternative energy production systems, of course, and we must work harder to conserve and preserve the planet's ecosystem and protect it from humanity's impact (some would say that that is a human duty). What we certainly don't need is, first, insane, pseudo-scientific thought diseases that will result in real envoronmental damage (as has been seen already), and second, to pour hundreds of billions of pounds of wealth into the stratosphere based on that lie, wealth that could and should be used to modernise the world's infrastructure today.

It is time for people the world over, the vast majority of whom don't believe the climate lies any more in any case, to start shouting out loud: not in my name!
Posted by Jon Lishman at 3/28/2010 04:23:00 pm