Hard to believe this thing is actually going to be built. Talk about the emperor's new clothes. And I think it's in pretty bloody bad taste, too, in the sense that Lakshmi Mittal is donating 1400 tonnes of foreign steel to build the damn thing. A further kick in the teeth for what's left of the Tata owned British steel industry, following the closure of Redcar. Oh, right, I'd almost forgotten: no one cares about that. 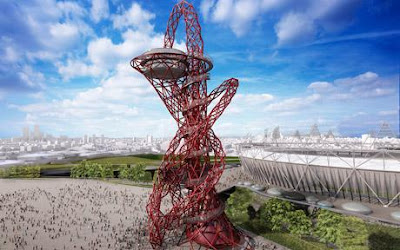 Nice idea, crap choice, Boris. If it's going to be built, it should not be built in London. Bombay can have it - but they probably wouldn't want it. I very much doubt anybody would. Mittal, on the other hand, will be thrilled. All that publicity, just for a bit of cheap steel made by underpaid workers in India. Good for him (not for Britain).
Posted by Jon Lishman at 3/31/2010 06:07:00 pm