Troughers To The Bitter End 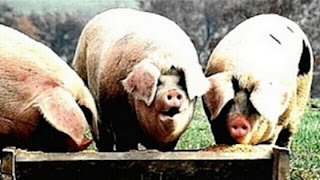 In tomorrow's Mail on Sunday and Sunday Times, two stories reveal just how venal former Labour ministers are. It simply beggars belief that these four, Geoff Hoon, Patricia Hewitt, Margaret Moron (sic) and Stephen Byers will almost certainly escape at the very least some form of criminal investigation for corruption.

One other thing is certain, unless the Tories get tough on this issue and threaten to seek prosecutions for what amounts to the worst sleaze probably in modern British history, we, the long-suffering public, will simply never know to what extent we have been comprehensively fleeced by the most corrupt and disastrous regime we've ever experienced in Britain.

Cameron, if and when he wins, had better be genuinely 'whiter than white' or I guarantee that this time around there will be bloody hell to pay. He needs to be concentrating on making sure any government he leads is unimpeachable by reviving the principles of collective and ministerial responsibility which have withered and died under Blair/Brown; that any future parliament is beyond reproach by making sure any pocket-lining MPs forfeit their office; and that the sins of the past, especially by these Labour criminals, are not simply forgotten, by resisting any pressure for an amnesty. I'm sure Gordon Brown would be pleased to return the favour given half the chance - but that's not the point.

This should be one of the major focuses of a new Cameron government, and definitely not woolly headed, watermelon carbon taxes that will severely damage the economy, justified on the basis of a now pretty thoroughly discredited scientific theory, itself a trojan horse for a socialist agenda.