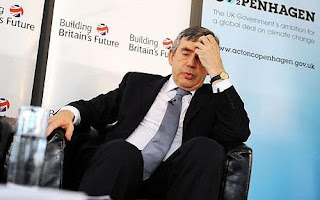 Jeff Randall, as usual, has said precisely what needed to be said (ie: the truth) about the implications of Labour's latest act of political violence against the country we somehow collectively permitted it to ruin once again. Now don't get me wrong. I'm a grown-up (sort of) so I can take a bunch of socialist tax rises and spending lunacy on the chin. I'd expect nothing less from these power-hungry economic illiterates.

What I will not tolerate, at all, however, is the prospect of future generations having to pick up the bill for their rank electioneering and amoral, scorched earth economic blitz. Randall explains how and why this is precisely what will happen if the current voting generation really is stupid enough to allow the Labour fraud to work come the general election.

I'm no longer in the habit of lifting whole pieces from other sites (it breaks one of the ten blogging commandments that I take pretty seriously these days), but there are exceptions. This is most certainly one of them, because it's too important to ignore:

If you want to know what would become of Britain were Labour to win another five years in power, turn to page 189 of the Treasury's Budget book. Before you do so, however, slip into a straitjacket and gulp down an elephant tranquilliser. Prepare to feel like Jack Nicholson in One Flew Over the Cuckoo's Nest as he was administered huge electric shocks.

In Table C3 – Current and Capital Budgets – there's a line showing Public Sector Net Debt, ie how much we, as a country, will owe our creditors (not including personal borrowings). Now, cast your eyes over the column
"2014-15". Pow! I bet that hurt. Have another go: it's not a printing error.

Yes, according to the Treasury's forecasts, the United Kingdom will nearly double its indebtedness from £776 billion (in 2009-10) to £1.4 trillion. Even in Gordon Brown's devalued, debased and degraded system of accounting, that is still a poleaxing sum, equal to about one year's national output.

It gets worse, because this unprecedented and unimaginable debt projection is based on Alistair Darling's optimistic assumption that, from 2010-11, the UK's economic growth will bounce back to 3-3.5 per cent, well above long-term trend. If you are feeling confused, don't worry, you are meant to be.

Listen to the assurances of Mr Brown – that his ministers are acting to "halve the deficit" – and you might be forgiven for thinking that there's a credible plan to reduce our national debt. In fact, the very opposite is true.

Labour's plan, if one can so dignify it, involves a viral proliferation of state borrowing. In effect, the Government has turned the country into a home-owner whose mortgage is too onerous. Interest obligations are increasing faster than our ability to repay. Money goes out of the national account every month, but the capital owed is ballooning.

In his Budget speech, the Chancellor was reserved, cautioning that there is nothing "pre-ordained" about our exit from recession and "there are still uncertainties". But when it comes to inventing numbers to suit his political agenda, the calculations are sexed up with a Panglossian twist.

It makes no sense to warn that Britain's fragile recovery could not possibly withstand the rigours of the Conservatives' tough love, while at the same time attaching to it an assumption of turbo-boosted expansion for next year and the one after. As Ed Balls would not say, this a non-sequitur.

Never mind, let's for argument's sake accept that Mr Darling's wonderland becomes reality and everything in the Treasury's crystal ball turns out to be true. How much will we, Britain's taxpaying classes, have to fork out annually for the pleasure of holding £1.4 trillion of debt? Go on, have a guess.

Well, next year the bill will be £43 billion on £952 billion of debt, an implied interest rate of 4.5 per cent. Apply that to £1.4 trillion and by 2014-5 those who contribute to the Chancellor's coffers will be forking out £63 billion a year in interest. That's 150 per cent of our current defence budget and three times what we will spend next year on industry, agriculture and employment.

Time for another happy pill, because the real outcome will almost certainly be more painful than that. For a start, the OECD rejects Mr Darling's growth prediction, insisting that Britain's economy will expand next year by only 2.2 per cent. Without a drastic slowing of Labour's spending binge, weaker growth will inevitably necessitate even higher levels of state borrowing.

Then there's the cost of servicing that debt mountain. Today's rock-bottom interest rates are unlikely to be on offer come 2014-5. Add these factors together and it is not unreasonable to conclude that Britain's annual interest bill could be approaching £100 billion five years hence.

This is legalised theft, a national disgrace. Under the bogus banner of "fairness", the Government is stealing from our children's tomorrow in order to buy votes today. It's bad enough that the current generation of university students – including those at third-rate former technical colleges – will emerge with an average debt of £23,500 (see last year's survey on push.co.uk), but they will also have to compensate for their forefathers' profligacy.

When he was in opposition, Mr Brown lambasted John Major's government for "the costs of failure", by which he meant the bills for unemployment and debt interest. He was right to do so. Unfortunately, on this Prime Minister's watch, those very same costs are rocketing out of control. His steadfast refusal to contemplate affordable spending has created an island of debt junkies: economic vandalism.

And for what? Clearly much of that extra funding for education – lots of nice teaching assistants – isn't working, otherwise Mr Brown's little helper, Mr Balls, would not be so angered by the success of grammar and private schools. Next year, the Government will spend £89 billion on education (an 80 per cent increase in 10 years) and yet our best universities are being strong-armed into accepting comprehensive-school pupils with sub-standard A-levels, in order to make up for a state system that is failing the poor.

If we are to extricate ourselves from this dung hill of Labour's making, Britain has three choices. We can default, an option not even Mr Darling favours. We can raise taxes, and that is already happening. But to knock a hole in that £1.4 trillion, punitive taxation would need to extend so far down the food chain that even dinner ladies would be heading for Zurich.

That leaves fiscal responsibility. We can stop pretending that the state is a machine for ever-increasing mass entitlement and, instead, align public-sector spending with our ability to pay.

The trouble is, while Mr Brown remains in charge – and the latest poll in the marginal constituencies suggests he may yet survive – this will never happen. He will always use the public purse as a tool for his party's advantage.

Professor Philip Booth of Cass Business School sums up the problem: "Almost every Budget measure [on Wednesday] involved a spending favour for some small group or other, or some tax relief for a group that the Government hopes to sway behind the Labour Party at the election."

Thanks to Channel 4's Dispatches, we learned this week that the daily rate for former Labour ministers "on the make" is £5,000. Perhaps we should pay the entire Cabinet that rate to clear off for good and save ourselves a fortune.