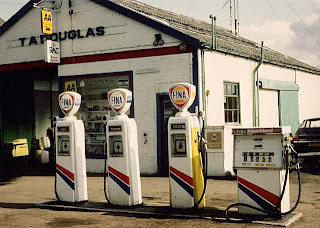 If any further evidence of the pain being caused by the inexorable slide in the value of the pound, and the subsequent inflation an import-addicted economy is suffering, were needed, the latest reports about rocketing petrol prices provide it.

The Independent, for instance, tells us that pump prices have risen by well over a fifth in the past 12 months, although it omits to mention that they were pretty stable for most of that period. It's been the last three months or so that have seen the bulk of the spike - so far. And there is far worse to come. If you drew a graph of petrol price rises over the past 12 months, the line would roughly trace a parabola. My own local Texaco has pushed its prices up five times in the last five weeks alone - to an eye-watering 117ppl, and perilously close to the record of 119ppl, which happened when oil prices had ballooned to $147/barrel, just before the crash.

Today, as of 5.38pm GMT, the NIMEX crude oil price stands at around $81 a barrel and falling (itself an inflated price caused by artificially created conditions of scarcity by OPEC output cuts) as bad consumer spending data in the US causes further jitters on their markets. That's a full $66 a barrel less than the previous spike - or 44%. Even taking into account Darling's many tax rises that have since boosted that price (by about 7ppl since 2009), your pound is worth at least 35% less than it was before the crash came. The economic damage this is causing is unknown as yet, but it will be serious. Indeed, the Chancellor's plan to slap another inflation+1p hike on the price in the budget is, quite simply, economically suicidal.

The whole mess smacks of chaos, incompetence and desperation at the heart of a government hell-bent on pursuing a scorched earth economic policy, where they continue to mask the real horror of the current state of the British economy by creating yet more debt in an attempt to delay reality till after the election. But it's a spiral, with increased debt leading to further currency devaluations, followed by higher inflation, higher prices, especially on imports (like oil) - all paid for by us out of salaries that remain stubbornly flat - and then all that's followed by even higher (stealthy) taxes, and the cycle is complete.

I just hope people remember whose ineptitude is responsible for this renewed impoverishment (Brown et al) - and punish them accordingly, ie: severely. Otherwise, as I've said before, what comes next will make March 2010 seem like the good old days. At this rate, for instance, the two-pound litre will be with us just in time for the General Election and whoever wins will send a signal to the markets, who will then determine in which direction prices will move after that. If it's Labour, then the only way is up - for the petrol price, of course, but also for debt, the acceleration of devaluation, inflation, tax and pain.