Brown Thanks The Patients 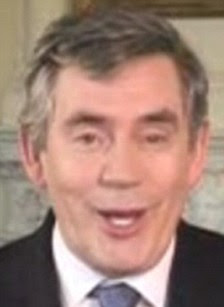 It's difficult to sit through a Brown speech at the best of times, but the one he's just making in Corby, another sad, preaching to the dwindling converted effort, is so notably bad that I felt it was worth a post. Oh, and compare and contrast: Brown relying on three autocues and a heavily spun speech, speaking to small room of carefully chosen party members, Cameron earlier speaking virtually off the cuff in the open air to large crowd of people and engaging them in the debate, shirt sleave order.

Anyway, first, the lies. Brown says the Tories would cut the NHS, and apparently his goons trotted out Dan Hannan's ancient interviews and speeches on how we can solve the problem of the bottomless pit that nationalised health care has become under Brown as evidence of an evil Tory plot. This is an out and out, barefaced lie, of course. Rightly or wrongly, the Tories have ringfenced health spending. It's in the manifesto. But maybe the print's too small for Brown to read - or, more likely, he just doesn't care because it doesn't fit with his divisive, perfidious Brownian narrative.

Second, his tax on jobs. As many in the saner parts of the mainstream media have said, not ramping up National Insurance taxation means you're leaving 6Bn quid in the economy. The tax on jobs means removing badly needed capital from the productive bit of the economy. I genuinely believe that in the world of Brownomics - the economics of mismanagement and collapse, of debt-fueled booms and gargantuan busts - this simple reality is not comprehended.

Finally, the bizarre. Early in the trainwreck speech, when he was going through his usual politbureau-style list of disingenuous 'thank-yous' (cue applause from the roomful of activists - and Devon Malcolm, oddly), he decided to thank, er, the patients.

Huh? What for? For being ill?

After all is said and done, and all the reams written about this weird man, I've finally come to the earth-shattering conclusion that, simply put, Gordon Brown is definitely bonkers.
Posted by Jon Lishman at 4/24/2010 11:45:00 am