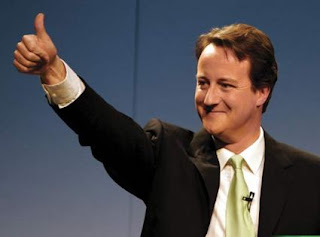 I've got it wrong before, so I'll most likely get it wrong again. My impression of this debate is that Brown under pressure was only ever really able to fall back on discredited smears and lies to try to score the odd point. Unfortunately for him, he's been found out, and his record speaks for itself.

Clegg once more tried to play on the anti-politics trick - it's tired, but the goodwill for him, that means people aren't listening closely enough to the monstrous contradictions in his party's manifesto, and, let's face it, in his party, will massage any positive view of his hesitant performance. To me, in trying so hard to rise above it all, from time to time he seemed simply to float away.

Cameron, by contrast, was tolerant, statesmanlike, patient and, above all, (and what he wasn't in the last two) completely coherent. He delivered on the substance, he sounded like a man with a positive hunger to turn this country around, but, above all, he calmly destroyed - destroyed - Gordon Brown.

As many have said, Brown needed to win this debate. Even if the popular, or spun (or both) opinion disagrees with the view that Cameron won by a country mile, what will be beyond debate from now until Election Day (or doomsday, for that matter) is that Brown lost it, and lost it bad.

Either way, that was the decider performance from Cameron that I expected, and got.

Cameron has just delivered on the faith many of us had in him, most of the time ;) He's delivered a Conservative government.

Breathe a sigh of relief on May 7th, when the work really starts. I will.

++Update++
A far better writer than I will ever be, Peter Hoskin, has framed it thus:

...as soon as it came to clarifying Lib Dem policy on an amnesty for illegal immigrants, the wings rapidly fell off the yellow bird of liberty. All of a sudden, Clegg sounded rattled and unpersuasive. From then on in, it was Cameron's game.

It helped that Cameron had the clearest – and, I suspect, the most popular – line on immigration: "We would cut immigration from the hundreds of thousands to the tens of thousands." But, really, the Tory leader's strongest answer came in a subsequent question on improving opportunities for younger generations. What we got then was what Cameron does best: the sunshine, the positivity, the sincere concern about our nation's schooling. We even got a neat summary of Tory school reform plans. As Cameron put it, he wants to see "choice, diversity and excellence" in the state sector. It was great to hear the Tories' most impressive policy agenda talked about in such straightforward, unequivocal terms.

As for Brown ... well, he was almost a caricature of himself: grey, relentlessly negative and obsessed with the old "cuts vs investment" dividing line. At the beginning of the debate, I thought some of his attacks had a blunt kind of power to them. But as the show wore on, and as it became clear that this was all he had to offer, he faded more and more out of view. By the end, with his closing pitch about the Tories' inheritance tax plans and tax credit cuts, it was unwatchably awful. There was little to distinguish this Brown from the one who murmured gloomily in the back of a car yesterday.