The Great British Public: Too Thick For Change? 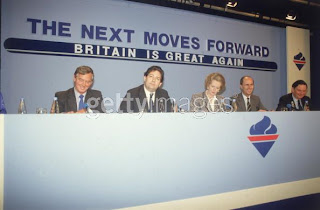 Of all the many posts written about the LibDum double act (Cable & Son) and its nonsensical, lightweight, irrelevant manifesto, I have enjoyed not a single one. Mainly because by their very existence they operate from an implied premise that it's worth engaging with these Yellow Tit-coloured, failed Labourists/Tory rejects.

So I won't be saying any more about that. What I will talk about instead is a pretty startling post by Daniel Finkelstein on his Times blog this morning about a poll for that newspaper which shows that the majority of people had no idea that it was the Tories who were offering to abolish the National Insurance hike for businesses and low/middle earners. They thought it was Labour (the party responsible for the rise)! But are the Fink's conclusions sound?

Think what this means.

First, that most voters are not following the argument one little bit. For a week this was headline news, yet they still ascribe the policy to the wrong party.

Second, and further to many past posts and many arguments, voters see policy only through their understanding of a party's values. The only policy of eight that was correctly attached to a party by the majority of voters was the marriage tax one.

According to him, therefore, all the great British public's political perception amounts to is a mixture of blissful, bored, complacent ignorance and a kind of passive awareness of propaganda terms associated with parties ("values"), rightly or - as is far more often the case - wrongly.

I disagree. These conclusion are based on fuzzy logic. A crisper, less politically explosive theory would be that all the poll really means is that the Tories - and this is comes as a big shock to me - have completely failed to get through to people, something that Margaret Thatcher (and even John Major) managed to do - and with, on the face of it, a far less palatable message.

The great British public is not thick, as in stupid. But it is thick, as in weighty and hard to move. Well, the Tories better start shifting their policies soon, or else...
...or else they'll wind up with a smaller majority! Boom boom.
Posted by Jon Lishman at 4/14/2010 04:00:00 pm