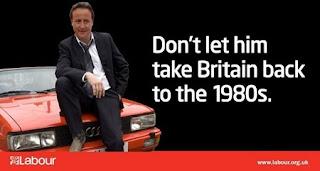 It reminded me of a bit of commentary from Richie Benaud in 1981 when Botham was lashing the Aussie attack to all parts at Trent Bridge. After Beefy had just scythed another bit of wide dross to the boundary at point, he (Benaud) was moved to say, "They're just not learning are they?" I'd like to think that if Sir Richie was a political animal, he would be inclined to say the same thing about Labour's truly amateurish, pimply sixth former poster 'campaign', which so far has managed not only to backfire at every attempt, but also to provide their opponents with some morale-boosting hilarity, too. Take their latest feeble effort (see above) - winner of an Ed Millipede-inspired (if that's the right word) competititon, no less (that would be the pimply sixth former influence, then).
As the Spectator said earlier:

Now, there are two immediate problems with this poster. The first being that I'd always thought the character Cameron is meant to be playing – DCI Gene Hunt – is actually quite popular with the public, despite his rough and less-then-edifying edges. Indeed, he even topped a recent poll as "Britain's favourite TV hero". If you're going to go down that whole 80s route, why not pick someone genuinely nasty – like Gordon Gekko, for instance? Or Skeletor...
And the other problem is that, with all the union action at the moment, and the state of the public finances, the Tories could just as easily produce their own alternative: Don't let them take Britain back to the 1970s.

The third problem is, of course, that it's childsplay for the Tories to bat these right back at the Labour hoons, with interest. This is what ConHome came up with first thing this morning (while I was still safely tucked up in the land of nod, I'll have you know).

Now, I realise it's not exactly brilliant, but it was put together in a couple of minutes, it makes the point directly (unlike the naff Labour school project effort), and, above all, it pokes fun at the limitations of the form itself by parodying the content of the anti-Tory one. Not bad.
Add to this the smart retort from CCHQ about the original, "David Cameron as Gene Hunt? We wish we'd thought of that", or words to that effect, and all you are left with is yet more evidence that it's amateur night in the bunker.
Since there have been rumours that he is struggling to cope with his brief, I'm left with the happy thought that this could be the sum-total of Ed Millipede's entire election campaign strategy: a whole series of pisspoor, failed attack posters - or short wide balls outside the off stump if you like - that the Tories just keep on battering for six. Perhaps it's a masochism strategy, which makes the nasty old Tories look like bullies for bashing Miliband minor's best balls all over the place. Who knows? Whatever it is, it's so bad it really is funny. And it won't work.
"Ashes to ashes, dust to dust, Brown's abolished boom and bust. Not." Best I can do.
You see, that's why I won't be submitting an entry to any Conservative slogan competetion for the general public, let alone having a crack at some dodgy artwork. And that's probably why, thanks to the rather more professional approach of the Tory strategists, they have no plans to start one. Labour, strapped for cash though they are, should take note. Better still, let's hope they don't - and keep 'em coming. At least it'll make their final defeat not only the best thing since the ZX Spectrum, but entertaining, too.

(Oh yeah, and lots of hat tips to Iain Dale.)

I mean, oh dear. Ministers of the Crown, remember, folks. Ministers - of - the - Crown. Dear God, we really are in the shit if this lot get back in.

Ministers of the Crown. Unbelievable. I mean, how?