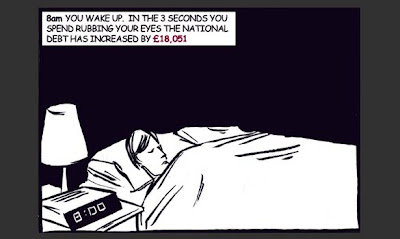 We are running out of money, especially the kind we're borrowing.

We're even running out of the money we're printing!

Thank Gordon Brown, thank Labour, for the worst economic crisis this country has ever faced.

And just remember, if you were stupid enough (like I was - in my youth) to be taken-in by "New" Labour's reformist lies at the start of this slowmotion train-wreck, that the last Tory government handed-over an economy in rude health - a genuinely "golden legacy".

Labour/Brown has squandered that Tory dividend ten times over - and more.

Socialists are fond of dumb counterfactuals when they feel like attacking all those who dare oppose them, especially "evil Tories". Well, I have one of my own: the current recession and debt crisis would have been nowhere near as severe if for the past ten years Tory spending levels and programmes had been strictly adhered to by that arrogant incompetent, Brown. Better still, had a Tory government followed its own spending programme from 1997 to now, instead of a medicated, economically illiterate, unbalanced, mediocre Scottish historian's twisted version of it, Britain would have been guaranteed a quick and relatively painless recovery from what is, after all, a "global crisis" (or so we have been told ad nauseum by Brown Labour). Britain would have been better off under the Tories, in every way.

We live and learn.

Fact is, my Tories would never have allowed things to get this bad and, had they been in power, would have managed any downturn from a position of absolute economic strength.

At the end of the day, in these "difficult times", Tories are just much, much less expensive than Brown and his incompetent Labourists. That is the devastating truth for Labour; a straightforward reality for the rest of us. A Tory recovery will be far more effective, far faster and far less painful than a Labour one. Labour only does spending; "recoveries" are beneath it. Sickening.