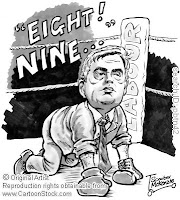 This massive attack from Alex Massie is the only piece you will ever really need to read to understand just how very bad Brown's speech litany of lies was.

Gordon Brown's speech to the Labour party conference this afternoon was, in its way, breathtaking. Breathtakingly shameless, mendacious, confused, contradictory, delusional, dishonest and irresponsible that is. It was also the speech of a Prime Minister resigned to defeat.

Elections are won in the centre, not on the extremes. But Gordon's speech was designed to appeal to the Labour base, not to Middle Britain. It was, then, designed to shore up existing support, not appeal to floating voters. It was for the left wing of the Labour party, not the Blairite voters who flocked to the party in 1997. Some of them left in 2001, still more stayed at home in 2005. On this evidence many of them will vote Conservative in 2010.

The Prime Minister takes the electorate for fools. But voters appreciate the appalling fiscal position the next government is going to inherit. They know that urgent action is required. But Brown pretended - as politicians are wont to do - that he could promise cakes for all and that everyone would still lose weight. Despite dozens of spending commitments - rhetorical commitments anyway - the deficit will be halvd in four years. The only thing missing was the promise of a free pony to every seven year old girl in Britain.

It was, also, inspired by a misguided analysis that seemed to have been written by Bob Shrum. Brown is for the "hard-working majority" not the "privileged few". The Tories, by contrast, are heartless toffs who want to put a "cap on aspiration" so that they and their gilded pals can loot the country.

But this too simply shows how politically tone deaf Gordon is. Cameron's weakest point is his past career in Public Relations, not his privileged upbringing.(Gordon's upbringing, incidentally, was, in the context of Kirkcaldy also privileged: son of the Manse and fast-tracked through an educational "hot house". But never mind...)

And, like all desperate politicians, he tried to wrap himself in the flag: Labour is the only properly patriotic party. Shameless and, in this instance, a leaf pilfered from the GOP playbook.

Indeed, this was a speech that might be best seen as a left-wing version of Mitt Romney's presidential campaign. Like Romney, Brown flip-flopped on a dozen policies he'd previously favoured leaving him in the curious position of, in effect, running against his own past. This, it must be said, is a tactic that rarely convinces.

There was, of course, the usual headline-grabbing nonsense: workhouses for single mothers and a National Family intervention Agency that, given how our bureacracy works, is a guaranteed disaster. But imagine the outcry if a Tory politician called for "Gulags for Slags" or "Wormwood Scrubs for Scrubbers"? Family breakdown is a real issue, but this was a gimmick designed for the sake of gimmickry, not any serious attempt to address a problem. Because addressing it would require a total rethink of tax and welfare policy and, consequently, demand another U-turn.

In other words, this was not in fact a serious speech by a serious politician in serious times. Quite the opposite in fact. It was yet another missed opportunity by a failed Prime Minister whose time is up. We know it and he must know it too. Given the chance to be straight with the electorate, Brown chose to be crooked and, worse still, absurd.

I didn't really think that Brown could fail to meet my exceedingly low expectations but, by god, he did.

It's political freefall from here on in for Brown (and Labour). What else could it be after a trainwreck performance like that? They'd better believe it - because he never will!

==Update==
The policy-on-the-hoof proposed by Brown in that speech to bundle bunches of badly behaved teenage single mothers into state-controlled housing, (quickly rebranded "Gulags for Slags" by some wits) was stolen from - wait for it - the BNP, Guido reveals.

I had no idea Brown was a fascist as well as being the most dishonest politician in the history of British politics. Naive of me.

The freefall accelerates - already. The Brownfall that up to this afternoon was dragging along so excruciatingly and so agonisingly is rapidly becoming a blur. Blink, and you might miss it. So keep 'em peeled, fellow bloggers. He's finally going down.
Posted by Jon Lishman at 9/29/2009 05:06:00 pm