Wars Not Worth Winning 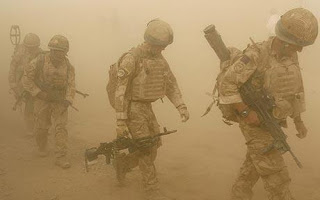 Afghanistan, Round 4, is one of them, history and common sense both teach. It's impossible to add anything useful to the following, coruscating tour of force from posh DT scribbler, Gerald Warner:

We did not need Eric Joyce to tell us we are in deep doo-doo in Afghanistan. In that far-off country of which, over the past 170 years, we have come to know too damn much, Britain has previous. For us, this is the Fourth Afghan War and it has turned into every bit as much of a resounding success as the previous three. If there is one thing in which the Ministry of Defence and the British public can claim expertise, it is getting cuffed in Afghanistan.

Tony Blair could not have been expected to know that, with an historical hinterland in which Hugh Gaitskell belonged to the Bronze Age (”Hey, look – come on – I mean – this is a young country”…), but brooding Gordon should have seen nemesis coming. The war is lost: end of story. Even post-neocon America is waking up to the fact, as evidenced by General Stanley McChrystal’s recent remark that “time is not on our side”. Among the American public, support for the war is melting faster than a polar ice-cap in Al Gore’s imagination.

So, how many more young men’s lives are we going to sacrifice on the altar of New Labour vanity, in addition to the 212 already scandalously squandered? Now Brown has given us the alleged justification of the war: to preserve security in this country. What neither he nor any other apologist for this cretinous conflict can explain is precisely what atrocity against Britain can be plotted in Helmand that cannot be equally effectively planned over the border in Waziristan? This echoes the long-established cliché trotted out by red-faced saloon-bar warriors: “Would you rather fight them on the streets of Britain?”

Well, actually, yes. Because the odds would be more stacked against them, despite mass immigration having to some extent provided jihadists with “the sea in which the guerrilla swims like a fish”, as Chairman Mao phrased it, by establishing large Islamic communities. There is no more favourable terrain for Muslim militants than the irrigation ditches and mountains of Afghanistan. So, why do we send our soldiers there, inadequately equipped, to provide them with target practice?

The significance of Brown turning to the “keep terror off British streets” claptrap is that he realises the previous claptrap, about “building democracy”, has even less plausibility after the spectacle of the Afghan elections rigged by the corrupt Karzai regime. Is that what young Britons are dying for? It is time to up sticks and exit. We know the way – we have travelled it three times before.

I'll add something anyway, though (however useless): pointless wars are not worth winning. They're certainly not worth ignorant Bliar's "blood price". And wars prolonged just to keep a man like coward Brown's image on domestic political life-support are just evil. Afghanistan is that war.

How much more of our nation's best blood must be spilled before Brown makes his inevitable exit next year? One more drop is too much. We could win, if we had the need, the will, a general call-up and, subsequently, 20 heavily armed divisions to prosecute it. Costly, but the "way".

If it really was for Britain, then maybe we could and should. But for Brown! It's just not worth it. Nothing has ever been more clear in British history. We must kick Brown out and then finish the "job" in Afghanistan, one way or another. Or bring the troops home - right now.