You Turn If You Want To, Gordo 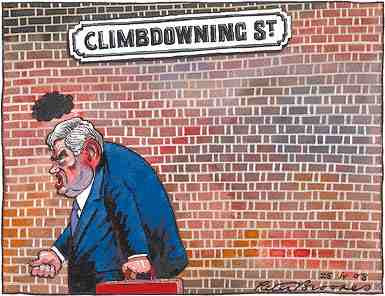 Before I pick up on the main theme of this post, I've got to tell you, it really has been one of those days today. This is the day, for instance, that my mother attended the cremation of a young Vietnamese man, murdered on the streets of my home town - an act of mindless savagery sadly all-too common in Labour's Britain. His family are too poor to make the trip from Vietnam to bury their son, so my mother's church arranged everything. About 50 people - mainly from the congregation but complete strangers to the boy, so I'm told - turned-out to pay their respects. That was a cause for some optimism, at least. There is some decency left among people in Britain; people who seem still to have some sense of duty. But I fear they almost exclusively belong to my mother and father's generation. And none of them is getting any younger.

Turning to happier events, it seems Brown has finally performed his much-awaited about face in the "cuts" debate - he's actually joined it, in other words. So he's filled the empty chair left for him by his enitre cabinet and set-out a clear plan for bringing public spending under control as soon as possible.

Well, no. Not really. The actual Brown outburst at the TUC was rather more muddled than that, as Iain Dale, among others, has already spotted. In the first place, he hasn't really changed his tune one iota. He's just tweaked the lyrics a little bit. And made them worse. Dale:

I had thought that Darling had persuaded him not to use the line about saving 500,000 jobs as it couldn't be substantiated, but he used it again in this speech. His criticism of the Conservatives was so laboured that it seemed as if he was just going through the motions. Indeed, it was a little odd for him to criticise Conservative public spending cuts, when his people were spinning that he was about to copy them. It's a major strategic error for Brown to go down this road.

Odd indeed. The Speccy's David Blackburn goes into a little more detail about why the cuts issue has become a no-win issue personally for Brown and generally for Labour, thanks to Brown's dithering and lack of courage.

Six months after a Politics Home/Spectator poll illustrated that ‘cuts’ was no longer a dirty word, Gordon Brown squared up and let slip the c-word.

A new Politics Home ‘insider poll’ reveals that 86% of respondents believe Labour would be in a stronger position now if they had admitted the need for future cuts at the time of the Budget. That is almost certainly true: the obvious contrivance that was ‘Tory cuts versus Labour investment’, together with the invention of 0% rise economics, torpedoed the government’s credibility. That said, the majority of Labour’s spending cuts will be delayed until we start enjoying the ‘proceeds of growth’ once more – a tactic that’s designed to emphasise a conceited division between ‘gleeful Tory scything’ and ‘Labour investment, regrettably stunted’. In short, little has changed.

The stubborn, pervasive anti-Tory mindset which characterises everything Brown does - he defines his political existence in terms of uncritical and often irrational anti-Toryism, rather than treating the issue on its own merits - has finally done for Labour. Treating the issue on its own merits would mean that he would not have felt the need even to mention the Tory party had he been setting out a genuine, new policy direction in a keynote speech to a major Labour constituency. But no. There it was - fumble the lines and then bash the Tories. The point is that that isn't working any more. It hasn't been working for some time.

Everybody knows that bringing spending under control is now an essential evil. In fact, in many cases, as the voting public now appears to suspect given the shape of the polls, there will be nothing evil about public spending cuts. Some things, like the Labour-infested quangocracy, are ripe for pruning.

But what about Mandelson's scare tactics (excellent ref.: Burning Our Money) - the dreaded 'double-dip', W-shaped recession? Well, a double-dip recession will not be caused by rising unemployment or by slashing spending. That is the neo-Keynesian mantra and it's never been proved (besides, the Keynesian system for pump-priming has never actually been attempted - you're supposed to do it during the upswing in the cycle, not in the middle of a slump). The "double-dipper", if and when it happens, or the stagflation - whatever you want to call it - will be caused by inflation, and inflation is on the way back with a vengeance. This has been known for months and Mervyn King more or less acknowledged it today, as far as I could tell. QE isn't working and Labour have lost control of the money supply. Next stop: devaluation. The "longer and deeper under the Tories" message is, quite simply, a lie. Of course it is - it's what Brown thinks; it's what Mandelson says. But it won't wash any more. Brown has been rumbled and the fact that in this non-U-turn/U-turn speech today all he could do was somehow blame the Tories for something they haven't actually done yet - and won't do anyway (and they haven't been in power for 13 years) will be seen by people as so utterly feeble that it will simply drive them into the welcoming arms of Cameron and Osborne.

Incidentally, Benedict Brogan has written an interesting piece on this subject this evening. Check it out. Oh heck, I'll just rip it ;)

Time to dish out the awards for getting Gordon Brown to surrender on c*ts. First in the queue must be George Osborne and David Cameron, who stuck it to the Prime Minister for months, culminating in that remarkable series of PMQs confrontations in July. Mr Brown is credited with that line about “Oppositions move to the centre, while Governments can move the centre”: The Tories can claim to have pulled off the improbable, which is moving the centre while in Opposition. “Tory cuts v Labour investment” cost them the last two elections, and there was little enthusiasm for a third go. It’s not quite Charles Martel stopping the Saracens at Poitiers, but suddenly they are off the hook.

Labour is now trying to impale them on another one, namely cuts now v cuts later. But if, as Mervyn King suggested today, we are already seeing a return to growth, then Labour’s case for putting off cuts might look fairly empty by Christmas. Remember, 2009/10 is settled. What is in dispute is what happens in FY2010/11. Peter Mandelson tried to head that off with warnings of a double-dip, but Alistair Darling wasn’t buying that idea today. Of course, with Vince Cable beating Labour and Tories in the candour stakes with specific proposals for what might be chopped, there is still plenty of scope for testing the Tory line. But a big achievement nevertheless.

Also deserving of praise - and arguably the ones who got the PM to shift - are the Lord First Secretary and the Chancellor. Mr Darling is now Labour’s Mr Straight who has used quiet persuasion behind the scenes and incremental rhetorical shifts in public to herd the PM towards today’s statement (although even he must have known that blaming a media ‘game’ was frankly biscuit taking). Likewise Lord M, who has few hang-ups about talking cuts, and has been pressing Mr Brown with ill-disguised frustration to stop offering himself for Tory target practice. They plan now to turn the fire on the Conservatives by pressing for details of what would be sacrificed in that “emergency” Budget Mr Osborne confirmed today.

But there is someone else who deserves several minutes of applause in my book, and that’s my former Room 7 colleague Fraser Nelson. He was the one who earlier than most was banging on about the reality of what would happen to spending in 2011 and beyond. He provided the ammo that the rest of us used. What a potent combo it will be, to have a Spectator editor who is numerate (and who still blogs).

They're offering 4/1 odds at Paddypower on whether Brown will last through November. If you are a gambler, I suggest you take them - they'll only get shorter from here on in.
Posted by Jon Lishman at 9/15/2009 08:30:00 pm