The Longest Litany of Lies In History

Yes, I've just sat through the worst list of delusional misrepresentations of history - and everything else - I have ever heard. It was absolutely and utterly sickening in ways I had not imagined even Brown could be. 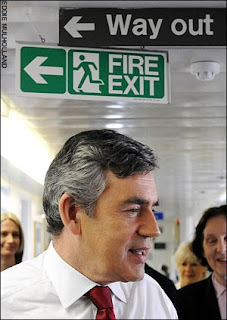 To cut a long story short, Brown isn't going anywhere because he is quite definitely certifiable. He is going to ruin the country - and promise absolutely anything - to lie and buy his way to what he thinks will be General Election success. The only trouble is, no one will believe him because no one wants Brown.

What he has done with this speech, by going way, way too far this time with the untruths and the rewriting of history (John Major started the Northern Ireland peace process, Gordo), is provide the Conservatives with more than enough ammunition to blow away this terrible, terrible man once and for all.

The long, long litany of lies that comprised the most dishonest speech in British political history, and provided a complete - if muddled and meandering - summary of his disastrous career, will prove to be Gordon Brown's political epitaph. Thank God.