Watching (reluctantly) Marr's interview with the one-eyed depressive this morning, one thought occurred to me that might be worth sharing: this dead Labour government can still do an awful lot more damage to this country in their desperation to keep up with the hated Tories and curry favour with the many disparate lobby groups that exist on that party's powerful lunatic fringe (it's a big fringe). The latest piece of policy on the hoof is an assault on the hated Tories bankers who have, or so the Labour narrative now runs, brought the country to the brink of ruin, er, by doing exactly what Gordon Brown encouraged them to do for a decade: making money out of debt.

They've also stolen a Tory policy (the super-quango which will be known as the Office of Budget Responsibility - or something, a good idea) and turned it into another piece of proposed legislative madness (t 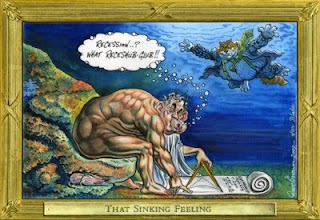 he Fiscal Responsiblity Act) that apparently, somehow, will "stop" future governments from spending too much of our money (a bad idea because not only will it not work, it runs the risk of creating the situation of a government potentially having to prosecute itself. A truly Brownite solution, then). But hang on: just when, exactly, did Gordon Brown realise that he'd been spending too much of our money? Or is this Darling's handywork? It feels like Balls to me.

Just when, precisely, did the Labourists decide that they could turn legislation into commandments? Just who the hell, please tell us, do they think they are? I suspect this latest bit of bonkers Brownite bluster will never actually see the light of day and is merely intended to deflect attention, as usual, from who is really responsible for the catastrophic deterioration in the public finances - nutter Brown. It's also another bit of typical, ultra-cynical, Labourist triangulation designed to outsmart the hated Tories. Epic fail there. But there's a little more to it than even that.

Policy on the hoof, of which this is merely one example, made by this dead administration, is the most corrosive and dangerous emergent Brownite behaviour yet. The Tories need to squash it all with a clear agenda of their own. Rubbish non-policies need to be rubbished. Forget the smears - that's just Brown-Labour being Brown-Labour - focus on their knee-jerk, dishonest reactions to a disaster of their own making because when they are finally gone, we will have to live with the consequences of their making a bad situation far worse.

Personally, I think it really is time for Labour to wise up to the fact that Brown is not just a loser, he's a dangerous loser who will destroy the Labour party itself rather than give up the office he stole. He's already practically destroyed the economy so what, a man like that always thinks, has he got to lose?