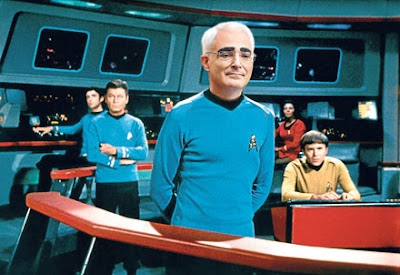 I heard some quietly chilling news on the radio while driving into work this morning and have just got in to find that Guido has already written an excellent post on the subject of deflation or, to be more precise, inflation. Yup, as predicted on the more sensible financial blogs for months now, the latter's on the rise again. Be warned, however, this is just the beginning.

As Scottie would say on the Starship Enterprise to a captain screaming for Warp 12, "I canna' break the laws of physics, Cap'ain!" In this case, the chief engineer of the Starship Britain is Mervyn King (Alistair Darling is just the helmsman); its utterly reckless captain, who managed to navigate the ship straight into an economic black hole, is Brown (naturally); and the laws of physics are, unsurprisingly, the laws of economics which, by the same token, "canna' be broken."

You print money, you devalue it. You print bucketloads of it and, well, you are courting calamity. You go into massive debt, with a huge structural deficit bolted on, and you compound that potential devaluation and turn a calamity into a catastrophe. Simple as. They will tell you that it's the oil prices, that the money is still sound. They aren't just being dishonest, I'm beginning to wonder if they (these economics 'experts') actually know what the hell they are talking about. The temptation is to trust them - they're the boffins, after all - but the economic forces at work here are so powerful that, you know what, they might not have a clue. Either way, it will be very hard for the next (I hope sensible) captain to pull us out of the gravity vortex Brown has steered us into without stripping the vessel of all its masses of dead weight first, and then by reigniting the engines with the fresh plasma that is tax cuts and other incentives for wealth creation.

Fortunately, David Cameron wrote an excellent piece for the Times this morning which outlined those very things. If only he'd reconsider the 50% tax, too. It wouldn't signal a warp speed recovery, but it might send a vital message to wealth creators and investors that they won't be punished just for being successful and simply for doing what they do best: making money and then spending it.

Here's Guido's thoughts just in case you can't be bothered to click through:

Guido was more than sceptical when politicians and Labour luvvie economists like Gavyn Davis started talking up the bogeyman of deflation at the same time as the government was running up massive fiscal deficits. It seemed too handy a coincidence that they would print money on a scale never seen before at the same time as issuing debt on a scale never seen before. They subsequently, coincidentally, bought the debt using the money they had just printed.

This we were told was to stave off deflation which it was emphasised was very bad. Goods becoming less expensive was somehow worse than goods becoming more expensive. If we got deflation it would be the end of the good times for ever according to even monetarist economists. Guido was sceptical that deflation was necessarily bad, history shows that there have been times of increasing prosperity that coincided with deflation. Deflation happened several times in the nineteenth century. During that era of rapid economic development there were no central banks and money was calculated as a certain quantity of gold or silver.

Deflation was not necessarily a threat to our prosperity, in a situation where the money supply is stable it is the manifestation of prosperity and pensioners know that their standard of living would have improved. With inflation now upticking this experiment in Mugabenomics* has to be reversed without setting off hyper-inflation or collapsing the government debt market. The policy authorities have figured out how to prop up the gilt market – they are changing the regulations to force banks to buy government debt to the tune of hundreds of billions. It remains to be seen if they can avoid an inflationary catastrophe, surging record gold prices suggest the markets suspect not…

*©Vince Cable, who was against QE before he was in favour of it. God knows what he thinks now.