The People The Warmists Destroyed, Pt 74 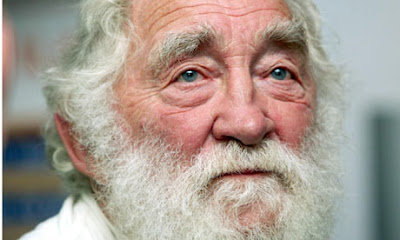 David Bellamy, that avuncular botanist from my childhood who educated and campaigned, who championed the environment and celebrated the natural world with an infectious enthusiasm few could (indeed can) ever match, was destroyed by the people behind the AGW alarmism simply for being what they deemed to be a dangerous "sceptic." It seems he might finally be vindicated, at the age of 76, following the Climategate scandal. Perhaps there is a little justice in this world of ours after all. And perhaps ordinary people need finally to wake-up and be a little more choosy about which experts and what claims they decide to believe in future.

Dr Bellamy's comments in an interview he gave to the Telegraph recently are rather moving in that they give you some idea of just how much damage the alarmists have been prepared to cause in their ruthless pursuit of their goals, goals which increasingly appear to have been covertly political rather than purely scientific in nature.

I spent my 50th birthday in jail. We were protesting against the flooding of this amazing river in Tasmania. I was in solitary confinement in Hobart’s Risdon Prison and Rosemary was getting hounded by the press, who kept asking about me. She said, 'For the first time in my life I know exactly where he is.’

I’m sceptical about man-made climate change. There’s absolutely no proof that carbon dioxide will kill us all. It’s not a poison, it’s the most important gas in the world. Carbon dioxide is an airborne fertiliser. How can farmers grow increasing amounts of food without a rise in CO2?

I used to be very popular but most of the green people won’t even speak to me any more. When I was sacked from the Wildlife Trusts because of my views they didn’t tell me, I read about it in the paper.

We now have evidence of just how genuine environmental activists and scientists who, like David Bellamy, happen not to subscribe to the AGW narrative, were deliberately targeted and ruined by the powerful climate change lobby. This report, for instance, just published on the Australian news site Heraldsun.au, whose newshound Andrew Bolt is tackling the story head on (unlike the rest of the MSM), gives you a fair idea of the lengths to which "The Team" were/are prepared to go to silence their critics, particularly when they were/are fellow scientists.

This time we’ll focus on the sheer thuggery of the “The Team” - how this conspiracy of powerful alarmist scientists tried to drive sceptics and non-allies out of their jobs, and even succeeded.

Example one is the email from Tom Wigley to IPCC author Timothy Carter about the Climate Research journal, then edited by sceptic Chris de Freitas:

PS Re CR, I do not know the best way to handle the specifics of the editoring. Hans von Storch is partly to blame—he encourages the publication of crap science ‘in order to stimulate debate’. One approach is to go direct to the publishers and point out the fact that their journal is perceived as being a medium for disseminating misinformation under the guise of refereed work. I use the word ‘perceived’ here, since whether it is true or not is not what the publishers care about -- it is how the journal is seen by the community that counts.I think we could get a large group of highly credentialed scientists to sign such a letter—50+ people.Note that I am copying this view only to Mike Hulme and Phil Jones. Mike’s idea to get editorial board members to resign will probably not work—must get rid of von Storch too, otherwise holes will eventually fill up with people like Legates, Balling, Lindzen, Michaels, Singer, etc. I have heard that the publishers are not happy with von Storch, so the above approach might remove that hurdle too.

Further emails from the team in its successful pursuit of de Freitas’ scalp:

#1047388489
This was the danger of always criticising the skeptics for not publishing in the “peer-reviewed literature”. Obviously, they found a solution to that–take over a journal! So what do we do about this? I think we have to stop considering “Climate Research” as a legitimate peer-reviewed journal. Perhaps we should encourage our colleagues in the climate research community to no longer submit to, or cite papers in, this journal. We would also need to consider what we tell or request of our more reasonable colleagues who currently sit on the editorial board…What do others think?

It results from this journal having a number of editors. The responsible one for this is a well-known skeptic in NZ. He has let a few papers through by Michaels and Gray in the past. I’ve had words with Hans von Storch about this, but got nowhere. Another thing to discuss in Nice !

This second case gets to the crux of the matter. I suspect that deFreitas deliberately chose other referees who are members of the skeptics camp. I also suspect that he has done this on other occasions. How to deal with this is unclear, since there are a number of individuals with bona fide scientific credentials who could be used by an unscrupulous editor to ensure that ‘anti-greenhouse’ science can get through the peer review process (Legates, Balling, Lindzen, Baliunas, Soon, and so on)….

Example two is the blocking of papers by sceptics and the less-alarmed to the IPCC deliberations:

The other paper by MM is just garbage – as you knew. De Freitas again. Pielke is also losing all credibility as well by replying to the mad Finn as well – frequently as I see it.

I can’t see either of these papers being in the next IPCC report. Kevin and I will keep them out somehow – even if we have to redefine what the peer-review literature is !
Cheers

Example three is the driving out of Professor James Saiers as editor of the Geophysical Research Letters journal, which under him had published a sceptical paper by sceptics Sallie Baliunas and Wille Soon.

Proving bad behavior here is very difficult. If you think that Saiers is in the greenhouse skeptics camp, then, if we can find documentary evidence of this, we could go through official AGU channels to get him ousted.

I’m not sure that GRL can be seen as an honest broker in these debates anymore, and it is probably best to do an end run around GRL now where possible. They have published far too many deeply flawed contrarian papers in the past year or so. There is no possible excuse for them publishing all 3 Douglass papers and the Soon et al paper. These were all pure crap.

There appears to be a more fundamental problem w/ GRL now, unfortunately…

Yeah, basically this is just a heads up to people that something might be up here. What a shame that would be. It’s one thing to lose “Climate Research”. We can’t afford to lose GRL. I think it would be useful if people begin to record their experiences w/ both Saiers and potentially Mackwell (I don’t know him–he would seem to be complicit w/what is going on here).

If there is a clear body of evidence that something is amiss, it could be taken through the proper channels. I don’t that the entire AGU hierarchy has yet been compromised!

Just a heads up. Apparently, the contrarians now have an “in” with GRL. This guy Saiers has a prior connection w/ the University of Virginia Dept. of Environmental Sciences that causes m some unease.

I think we now know how the various Douglass et al papers w/ Michaels and Singer, the Soon et al paper, and now this one have gotten published in GRL,

And so was Bellamy. Pretty chilling stuff. I'll be following Andrew Bolt's blog with interest from now on. If you care about the truth, I recommend that you do too.