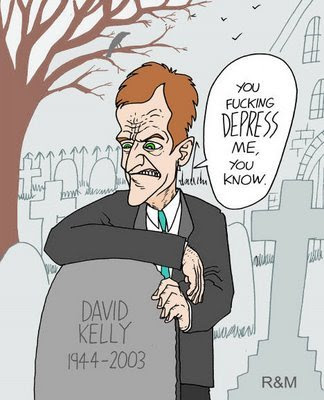 Just been listening to Radio 4's news on the way back from a little trip and was surprised (or, perhaps, wasn't surprised one little bit) to hear that Sir Ian Kennedy, friend of Alastair "David Kelly's Death Made Me Depressed" Campbell, no less, and appointed head of the flash, new independent committee charged with monitoring MPs' behaviour and finances in future (but is laughably answerable to - you guessed it - a committee of MPs) has begun to backtrack on the other Kelly's reforms. That was a long sentence, I know, but I do tend not to brake for the corners when I'm miffed. And I am miffed. This is looking like an all-too familiar New Labour balls up, with the wrong man placed in charge of the wrong solution to a problem that has one cause: people with no integrity - who need to be replaced en masse with people that do.

Anyway, the Torygraph's Benedict Brogan blogged something on the suspicious link between Kennedy and the still-lying, cretinous Campbell earlier on. It's quite interesting if only for the fact that liar Campbell, reduced now, or so we are led to believe, to the role of pisspoor, poisonous Labourist blogger, has anything to do with this scandal in the first place.

Alastair Campbell has produced a typically robust response on his blog to the Telegraph’s coverage of his friendship with Sir Ian Kennedy, the new expenses supremo. That the big-brained head of IPSA, the body charged with sorting out the expenses mess, thought the French were capable of producing Skylab must remain one of the great bafflements of the age.

What is more worrying, and should be studied closely by anyone with an interest in the way Parliament is addressing the challenge of cleaning up the expenses system, is the overnight revelation that Sir Ian has decided to challenge the Kelly recommendations. Sir Christopher Kelly’s committee reported on Wednesday with a list of recommendations for making the system more transparent and credible. The party leaders endorsed the report and asked for it to be implemented in full. The public appeared to react positively to it, and even if some MPs griped anonymously about its reommendations, most wisely accepted that it was a good piece of work that would help draw a line under this sorry affair.

Except Sir Ian has other plans and I gather has briefed some of my colleagues on what he envisages. You can read carefully worded accounts of what he has to say in the Telegraph, Guardian and Mail. It’s supposed to be hush hush apparently, but unless I’ve missed something I can’t see we should revert to the lack of transparency that allowed this scandal to develop in the first place. Specifically, Sir Ian believes he has a statutory right to conduct his own review of MPs’ pay and allowances, and intends to do so. He will have his proposals in place for the next Parliament. Apparently he doubts whether MPs can be made to hand over any capital gains or dismiss family members from the payroll. IPSA needs to be rigorously independent, but I imagine the party leaderships will be disappointed to discover that what they thought had been settled by Kelly is being reopened again.