As confirmation emerges that the Eurozone is now officially recovering, Guido has created a useful visual comparison between the current states of the world's economies for our convenience. 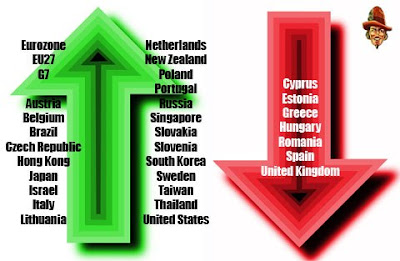 His conclusions are inescapable, for us and for Gordon "Best Placed" Brown.

As well as being the lamest economy in the G7 we share recessionary woes with economic powerhouses like Romania. Gordon Brown’s epitaph will be that he didn’t abolish boom and bust, that he didn’t save the world and he “lead the way” only in his imagination. The British economy has paid the price for his delusions.