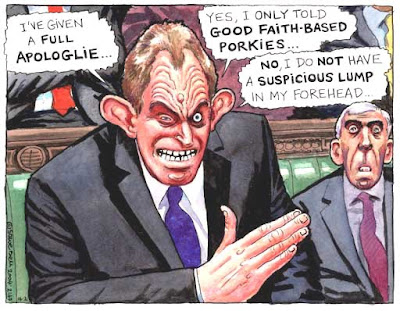 His many crimes, committed while he held office, are finally beginning to emerge. And they are most definitely crimes (in the sense that, you know, he broke the law, right - so, hey, he's not actually a pretty straight kind of guy after all. Right). But hang on, if they are crimes, and crimes they are, then arrest the shit, right?

Anyway, this dynamite litany of Blairite deceit will be revealed in tomorrow's Sunday Telegraph so people can then make their own minds up about whether we've been led by crooks, incompetents and liars for the past 13 years (or not).

On the eve of the Chilcot inquiry into Britain’s involvement in the 2003 invasion and its aftermath, The Sunday Telegraph has obtained hundreds of pages of secret Government reports on “lessons learnt” which shed new light on “significant shortcomings” at all levels.

They include full transcripts of extraordinarily frank classified interviews in which British Army commanders vent their frustration and anger with ministers and Whitehall officials.

The reports disclose that:

Tony Blair, the former prime minister, misled MPs and the public throughout 2002 when he claimed that Britain’s objective was “disarmament, not regime change” and that there had been no planning for military action. In fact, British military planning for a full invasion and regime change began in February 2002.

The need to conceal this from Parliament and all but “very small numbers” of officials “constrained” the planning process. The result was a “rushed”operation “lacking in coherence and resources” which caused “significant risk” to troops and “critical failure” in the post-war period.

Operations were so under-resourced that some troops went into action with only five bullets each. Others had to deploy to war on civilian airlines, taking their equipment as hand luggage. Some troops had weapons confiscated by airport security.

Commanders reported that the Army’s main radio system “tended to drop out at around noon each day because of the heat”. One described the supply chain as “absolutely appalling”, saying: “I know for a fact that there was one container full of skis in the desert.”

The Foreign Office unit to plan for postwar Iraq was set up only in late February, 2003, three weeks before the war started.

The plans “contained no detail once Baghdad had fallen”, causing a “notable loss of momentum” which was exploited by insurgents. Field commanders raged at Whitehall’s “appalling” and “horrifying” lack of support for reconstruction, with one top officer saying that the Government “missed a golden opportunity” to win Iraqi support. Another commander said: “It was not unlike 1750s colonialism where the military had to do everything ourselves.”

The documents emerge two days before public hearings begin in the Iraq Inquiry, the tribunal appointed under Sir John Chilcot, a former Whitehall civil servant, to “identify lessons that can be learnt from the Iraq conflict”.

Senior military officers and relatives of the dead have warned Sir John against a “whitewash”.

The documents consist of dozens of “post-operational reports” written by commanders at all levels, plus two sharply-worded “overall lessons learnt” papers – on the war phase and on the occupation – compiled by the Army centrally.

The analysis of the war phase describes it as a “significant military success” but one achieved against a “third-rate army”. It identifies a long list of “significant” weaknesses and notes: “A more capable enemy would probably have punished these shortcomings severely.”

The analysis of the occupation describes British reconstruction plans as “nugatory” and “hopelessly optimistic”.

It says that coalition forces were “ill-prepared and equipped to deal with the problems in the first 100 days” of the occupation, which turned out to be “the defining stage of the campaign”. It condemns the almost complete absence of contingency planning as a potential breach of Geneva Convention obligations to safeguard civilians.

The leaked documents bring into question statements that Mr Blair made to Parliament in the build up to the invasion. On July 16 2002, amid growing media speculation about Britain’s future role in Iraq, Mr Blair was asked: “Are we then preparing for possible military action in Iraq?” He replied: “No.”

Introducing the now notorious dossier on Iraq’s supposed weapons of mass destruction, on Sept 24, 2002, Mr Blair told MPs: “In respect of any military options, we are not at the stage of deciding those options but, of course, it is important — should we get to that point — that we have the fullest possible discussion of those options.”

In fact, according to the documents, “formation-level planning for a [British] deployment [to Iraq] took place from February 2002”.

The documents also quote Maj Gen Graeme Lamb, the director of special forces during the Iraq war, as saying: “I had been working the war up since early 2002.”

The leaked material also includes sheaves of classified verbatim transcripts of one-to-one interviews with commanders recently returned from Iraq – many critical of the Whitehall failings that were becoming clear. At least four commanders use the same word – “appalling” – to describe the performance of the Foreign Office and Ministry of Defence.

Documents describe the “inability to restore security early during the occupation” as the “critical failure” of the deployment and attack the “absence of UK political direction” after the war ended.

One quotes a senior British officer as saying: “The UK Government, which spent millions of pounds on resourcing the security line of operations, spent virtually none on the economic one, on which security depended.”

Many of the documents leaked to The Sunday Telegraph deal with key questions for Sir John Chilcot and his committee, such as whether planning was adequate, troops properly equipped and the occupation mishandled, and will almost certainly be seen by the inquiry.

However, it is not clear whether they will be published by it.

It's the worst, most profligate, incompetent, deadly, destructive, arrogant and shameless government we've ever had inflicted upon us - and still the polls remain slightly volatile, nonetheless.

But not after this Iraq stuff fully comes out, though, so there's really no need to worry. Brown and Labour are still dead in the water. And Blair really should be arrested.
Posted by Jon Lishman at 11/21/2009 11:46:00 pm