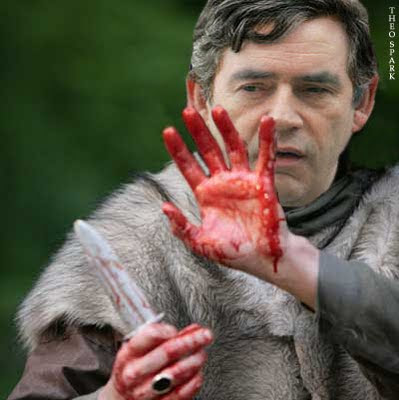 Thursday's Times will not make pleasant reading for the idiots in Brown's inner circle, or Mandelson (who no doubt was the 'brains' behind the operation), who came up with the worst Gracious Speech in living memory. On the front page of that esteemed organ is news of a "savage attack" from Labour peers, which represents an embryonic Labour rebellion that could grow into a monster that even Brown can't survive, over his back-of-a-fag-packet, cynical (in that it is designed merely to blur in the public's eyes the Tories' excellent and established policy commitments on the same issue) elderly care "Bill". Read on, Macduff:

A key plank of Gordon Brown’s re-election strategy was condemned by members of his own party yesterday as irresponsible, unaffordable and based on a myth.

The Prime Minister’s plan to offer free care at home to the elderly, outlined yesterday in the last Queen’s Speech before the general election, was compared to “an admiral firing an Exocet into his own flagship”.

Lord Lipsey, a former member of the Royal Commission on Long-Term Care, also accused the Government of peddling a “pernicious myth” that people are better cared for in their own homes than in a nursing home.

The measure, aimed at 400,000 of the neediest people, amounted to a “demolition job on the national budget”, he said, as the Government would be forced to cover unnecessary claims made by the better-off. He said that it threatened to undo current work on building a system to help the elderly and those most in need of care.

“I’m not looking forward to the night of the next general election but, if the result goes as I expect, one of the consolations will be that one of the most irresponsible acts to be put forward by a prime minister in the recent history of this country will be swept away with his government,” he added.

Lord Warner, a former health minister, described the care Bill as totally misjudged. “There has been no proper impact assessment, and no data to show how this would work,” he said. “There’s a big question mark as to whether there’s even actually a Bill ready.”

Other peers are known to oppose a Bill that many see as a last-minute, back-of-the-envelope proposal. Mr Brown, criticised by the Conservatives for what they said was a blatantly electoral programme of 15 Bills, faced more attacks from his own side. Charles Clarke, the former Home Secretary, said that the Prime Minister’s attempts to impose political dividing lines was “neither the best way to govern the country nor the best way for Labour to win in 2010”.

David Cameron said that the “biggest omission of all” was the failure to mention MPs’ expenses or the report by Sir Christopher Kelly, the chairman of the Committee on Standards in Public Life. Sir Christopher joined in the criticism, issuing a statement pointing out that party leaders had agreed that his recommendations should be implemented in full. It was disappointing, he said, that the speech failed to address the remit, powers and independence of the new body being established to regulate expenses.

A Downing Street spokesman said: “We are not standing in the way of any of Kelly’s recommendations. Everything related to sweeping away the old, discredited expenses system . . . can and should be implemented without further legislation.”

The criticisms of the care Bill were echoed by health economists. Niall Dickson, of the King’s Fund, said: “These latest proposals seem to have been hastily put together and appear to cut across the options set out in the Government’s own Green Paper.”

This, or, indeed, the entire, pathetic, so-called "programme" hardly went down well on last night's Newsnight, either. I've seldom seen BBC journalists more aggressive towards, and less sympathetic to, the Labour cause to which they have been devoted for so long. Brown's naked frailties have once again been exposed for all to see. He's managed to piss off everyone this time - quite an achievement even for a natural divider and blood-stained usurper like him. But it's still all very strange - almost mysterious - the way the bad vibe just seems to follow him no matter what he says or does. It's like some kind of darkness is abroad, stalking Brown relentlessly. Mice eating owls and all that other unnatural Macbeth stuff, you know? He just can't seem to escape it, wherever he turns. It's almost as if it's his destiny.

Well, if you bed the devil...(er, Mandelson?)...you only have yourself to blame if he comes for your soul afterwards. And you can't pin the responsibility for your fate on the weird sisters either (you know, Harman, ****** & ****** - fill in the blanks as you please: there's plenty to choose from).

One thing is certain, however, Brown's future as party leader, and therefore as Prime Minister, has just become a subject for open debate once more after that trainwreck Queen's Speech. But that's as natural as justice.
Posted by Jon Lishman at 11/19/2009 01:03:00 am