Now that the lame duck has been forced to be more "collegiate" - and he's doing that, according to Sky News, by "reasserting his authority" - huh? - here is the first image of the election "dream team" that apparently will bring the weird loser victory. 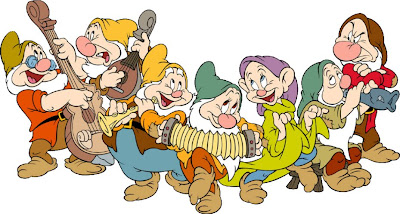 Their nicknames are, from right to left: Hateful, Lazy, Soppy, Creepy, Ugly, Crazy and Cock

Overall head of operations will be Cock (aka: Peter Mandelson). Policy chief will be Soppy (Alistair Darling). Director of strategy will be Lazy (Jack Straw). Communications manager will be Ugly (Liam Byrne). Campaign co-ordinator will be Creepy (Chris Bryant). Campaign chair will be Crazy (Harriet Harman). Official tea boy will be Hateful (Ed Balls).

That's just about it. Other Labour dwarfs will no-doubt be given other roles, but I couldn't fit them into the gag. (Shame Hazel Blears isn't still around. Mind you, I'm not sure she even qualifies as a dwarf, does she?)