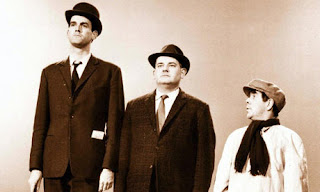 Inequality, that vague, almost indefinable term generally used by socialists whenever they want to attack the "evils of capitalism", is now the "worst" it has been since the 1970s - or so this government's own report says today. Of course, what "inequality" really is is a euphemism for poverty. It should be unsurprising to anyone who has lived through a few governments that poverty always increases under Labour, because Labour impoverishes the country with its insane, incompetent economics and politically-motivated, divisive, incredibly damaging social interference. What is important to remember, however, is that the "inequality" to which socialists refer is based on some bankrupt notion of class and "privilege" (in other words, aspiration, education and self-improvement). It's not genuine inequality, but politically motivated class warfare.

So, as we hear from Harriet Harman today, the left, with typical propagandist doublethink, will try to turn the fruits of their own disastrous misgovernance into justification for more of the same. Truly, they are that perverse in their desire to make the State king and to hammer wealth creators - and the middle classes - into the ground, all the while expanding what now must be termed Labour's "dependent classes" (they can hardly be called the "working" classes any more - and what we now know is that Thatcher wasn't to blame for that).

But the scale of the damage this time around, of Labour's betrayal of everyone, and in their own terms (it's a government-commissioned report, for heaven's sake) is truly astonishing and can't be escaped even by Labour's liars and spinners. Today's Mail:

The study says that inequality in income has reached the highest level since records began in 1961, and probably since the end of the Second World War. It also concludes that inequality in Britain is among the worst in the developed world, with the highest rate of poverty in western Europe.
It says 'deep seated and systematic differences' remain between the life chances of different social classes and groups. People's class and origins 'shape their life chances from cradle to grave'.The report says there is 'widespread ignorance of the scale of inequality' and warns that many people will find its conclusions 'shocking'.

So the report, as we can see from the right-on sociologist claptrap terminology employed, is definitely a left-inspired one - and it is still devastating for the government. So they can't even use the familiar Labour lie that it "would be/was much worse under the Tories" - because it wasn't - and because it couldn't be any worse under anyone!
The question everyone must now ask is this: if Labour can't even help making worse something they themselves presume to champion (ostensibly curing poverty but really robbing aspirational wealth creators to flatten social diversity), then what, exactly, are Labour good for? The answer that I for one have known for a long time now is simple enough: precisely nothing.
They are a redundant organisation belonging to a bygone age. I pray that when they are defeated this summer, they are beaten so badly that they are relegated to third party status. That would be more than they deserve, and I could tolerate the Liberals as one of the country's two mainstream parties. Hell, I could even vote for them if they ditched their ex-Labour left wingers.
But Labour, as far as I am concerned, have inflicted so much damage on this country in so many ways that they warrant nothing more and nothing less than abolition. It would be easy enough to do for any new incumbent government. Just make union funding illegal. Job done.
In the meantime, there is some hope (there is always hope) not least because we are nearly at the point when we can eject them, but expect Labour to become more and more abusive and dangerous in their desperation as the general election approaches (they've already cranked-up the television propaganda to epic levels, for instance). As John Redwood says, commenting on today's report:

The Labour response is likely to include new tortures for people who work hard, try to get on in the world, who aspire for themselves and their children.
What we need are policies which raise the sights and motivate the energies of the many. The way to reduce inequality – and to make most people better off – is to encourage and foster, not to regulate and tax in a fit of jealous anger that some have still succeeded.We need an enterprise package to make it easier to set up and run your own business, a small business package so more small businesses can expand and take on more labour, and a shake up of some schools and training Colleges so more obtain worthwhile qualifications.

As for Cameron, well, the one thing this disastrous report (for Labour) gives him is carte blanche to start listening far more to sane sages like Redwood (and Janet Daley) - and far less to the nutters, hypocrites, misfits and malcontents on the left.
Posted by Jon Lishman at 1/27/2010 09:58:00 am