The Phantom Coup - All Brown's Idea? 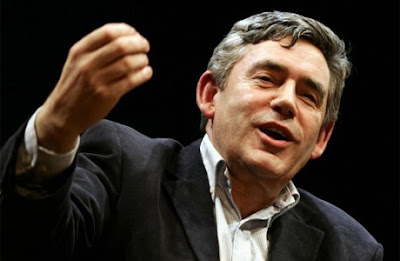 It coudn't have been, could it? I mean, even a divide-and-rule political thug like Brown hasn't got this level of game, has he? I refer to this extraordinary idea from a commenter calling himself "William Pitt" on Nick Robinson's soppy blog:

This is clearly instigated by Gordon Brown, very clever politics, it shows that the Labour Party is united behind GB, and lays rest any chance of the issue being raised again in the public mind. GB knew about it before PMQ, and he was clearly in a good mood that the media had fallen for it....wonder if it was Mandleson's idea....clever!

Impossible? I suppose I could believe it if it was a slippery schemer like Mandelson's idea, but Brown's? I guess it would explain why Brown didn't seem to give a toss at pmqs, even though, so we are told by Robinson, he knew about the whole thing this morning.

But why would he do such a thing? Well, it'd be true to say, as the commenter suggests, that any and all opposition to Brown from within Labour's rank and file has now been killed stone dead by this stunt, but, more importantly, so has the opposition to him from within his spineless cabinet. He now has what he will think is a free run at the election he's been so desperate to avoid for two years.

In reality, though, all this really demonstrates to us mere voters is how completely delusional not only Brown is, but a largish portion of the cabinet, too, in the sense that they really do believe that Brown is something other than a desperate electoral liability. That the remainder of the cabinet are just utterly unspeakable cowards has been been established beyond a shadow of a doubt as well.

So if it was all just a "smoke 'em out" stunt, then I'm afraid it was a totally desperate one that is guaranteed to backfire spectacularly in the country, where people will be only too happy to make the choice for Labour. If it wasn't, then it merely serves perfectly to illustrate just how rocky Brown's leadership really is, and just how fractured and totally unfit for government the Labour party has become.

Whatever it all means, what is certain is that we're either looking at a whole new species of political cynicism from Labour, if the 'phantom coup' was just a stunt, or at a level of incompetence unparalleled in British political history, if it wasn't.

Epic fail either way, but manna from heaven for the Tories.

I am probably giving New Labour too much credit, but is there even a slight chance that today's events were actually a charade cooked up between The Dark Lord (watch him closely) and two outgoing and formerly loyal ex-ministers in order to convince (a) the party, and (b) the electorate that in fact there is no real internal opposition to the current leadership, that as such the party is indeed united and that both the rank-and-file and the electorate have no choice, and no reason, other than to get behind the Labour Party and help them retain power?
Fanciful? Probably, but it wouldn't be the first time this bunch of deceivers has well and trully pulled the wool over the eyes of both the media and the electorate in Britain.

It may well be 'fanciful' and I'm reluctant to give Labour too much, or any, credit too. But it is a distinct possibility and the thought is clearly out there in the public imagination now.

There are other rumours around, to be found, for instance, in this article by Benedict Brogan for tomorrow's DT, that this was some sort of tactical play by Mandelson to outmanoeuvre Brown and his thuggish acolytes, especially Balls, before they have a chance to take over, following a failed election campaign. Whether or not the Dark Lord was behind the failed coup in the first place will probably never be known. But Brogan's conclusions, at the very least, about Mandelson's behaviour afterwards seem very plausible to me. In other words, Labour's inevitable civil war has already started, months before general election campaigning has even begun.

As Brogan says at the end of his article:

Lord Mandelson remains crucial to the fate of Labour – but his allegiance, as he argued yesterday, and has done for months, is to New Labour, not Old. Everything he does now is aimed at protecting the political project he nurtured into being. His sole aim is to ensure that New Labour is able to rebuild in opposition – and to do that means killing off Gordon Brown and those who support him.

This is the irony at the heart of yesterday's failed coup. Lord Mandelson is sparing Mr Brown now in order to be sure that, come election day, both he and those around him – specifically Mr Balls, his henchman and ideological mini-me – are destroyed. He believes the broad, aspirational, centrist coalition put together under Tony Blair is the only way Labour can hope to regain power. For New Labour to survive, he believes, the politics of Brownism must be rejected for good – and by the voters.

A good question for us mere little people to ask is: while Labour tears itself to pieces over its identity and future, just who, pray, is running the country? Rome is burning and Labour fiddles.

Because of this, no other conclusion can be reached other than the time for a general election is right now. This government is finished. Its determination to remain is self-interested, ignoble and disastrous for Britain. That no one in Labour will finally put country before party by having the guts to stand-up to Brown is the reason why they will deservedly be obliterated at the (eventual) general election.