The Voice of Rugby 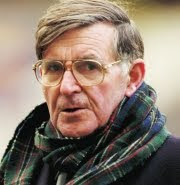 Bill McLaren 1923-2010
There are some lovely tributes around the blogs today marking the sad news that one of the great commentators in British sport has passed away at the age of 86. This one from Alex Massie is particularly excellent. Bill McLaren was indeed the 'voice of rugby', familiar to all who grew up with the sport at any time between the early 1950s and the end of the 1990s. For me, he was one of the top sports commentators anywhere in the world, right up there with John Arlott and Brian Johnston - among several others.
Suffice to say, they were simply the best - simply because their enthusiasm was only matched by their gift of making you feel that they were speaking directly to you, the listener or the viewer. They breathed life into a sporting event while expertly - even effortlessly (though nothing could be further from the truth - the illusion only came about with meticulous preparation) - adding all the kinds of information the audience needs to hear to enjoy a match to the full. The other ingredients added to the mix, which made Bill McLaren such a legend, were the colourful similes and metaphors and, of course, the joyful humour.
The Independent ran a piece on the great man last year, complete with a few tastes of his wonderful turns of phrase. And they are wonderful.
*It’s high enough, it’s long enough AND IT’S STRAIGHT ENOUGH.

*He’s like a demented ferret up a wee drainpipe.

*He plays like a runaway bullet (description of New Zealand wing Grant Batty).

*He’s like a raging bull with a bad head.

*That one was a bit inebriated – just like one of my golf shots (description of a missed goal kick).

*He kicked that ball like it were 3 pounds o’ haggis.

*Would ye like a Hawick ball, son ? (McLaren offering a friend a mint).

*They’ll be dancing in the streets of Hawick/Selkirk/ tonight???

*His sidestep was marvellous – like a shaft of lightning (description of Welsh wing Gerald Davies).

*The All Blacks that day looked like great prophets of doom.

*My goodness, that wee ball’s gone so high there’ll be snow on it when it comes down.

*Those props are as cunning as a bag o’ weasels.

*A day out of Hawick is a day wasted.

*And it’s a try by Hika the hooker from Ngongotaha (Wales v New Zealand 1980).

*I’m no hod carrier but I’d be laying bricks if he was running at me (description of Jonah Lomu).

*They’ll be simply chuffed to bits down at??.

*I look at Colin Meads and see a great big sheep farmer who carried the ball in his hands as though it was an orange pip.

*I’ve hardly ever had to pay to get in (the best thing in his view about 50 years of commentary at rugby matches).

I know it sounds silly, but it is a bit like losing part of your heritage - and part of your childhood - and sort of an old friend - when people like Bill McClaren die.
But at least we'll always have the memories...
Posted by Jon Lishman at 1/19/2010 07:02:00 pm