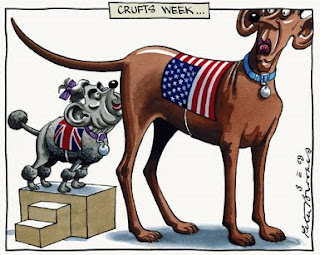 Seems that Obama's speech on banking regulation has finally put paid to any remaining pretence that Brown was in any way 'leading the world' in this area. It has, perhaps predictably, sent the government into a tailspin, with no co-ordinated response to the plans and, it seems, very little idea of what to do with the new information. According to Iain Martin:

So, since Obama spoke British ministers have been in quite a spin. The Chancellor’s office said Britain would not be following the U.S. but Number 10 said, rather nervously, that it is studying the plans.
“I think what the president is doing is very much in accordance with the direction we’ve been taking,” said a Number 10 spokesman. But that’s simply not true. Obama’s plans are not in accordance with the direction the British have been taking. A plan to break up the megabanks and inhibit proprietary trading is not at all what the Treasury wants. It wants the UK’s megabanks - RBS, and the Lloyds-HBOS monster it created mid-crisis - to trade their way out of their poor position and into safety so that taxpayer money can be recovered.
The Number 10 spokesman mused some more: “Obviously one of the issues in the banking world is that you have different circumstances in different countries.” Sorry, I thought a co-ordinated global response was supposed to be the priority?To further cloud the issue up popped Lord Myners of the Treasury. He said there is no way Britain will follow the Obama lead on this. But… “I think the important thing is that there is a globally co-ordinated response taking place here.”
Again, no, there isn’t a globally co-ordinated response. I repeat: Obama acted unilaterally on Thursday in making his biggest post-crisis reform proposal.
What there is here is a mess created by a serious breakdown in global policy-making. In a panic after his party’s Senate defeat in Massachusetts this week, Obama has decided he needs to be much tougher than he has been.
And it creates a serious difficulty for the current British government, which wants to appear in line with a president who popular on this side of the Atlantic and is taking on finance. But he is proposing to do what the Treasury and Number 10 do not want to do: he wants to break up the big banks
For the Tories this is a gift. They have advocated G20-wide policies similar to those now promoted by Obama - so they get to be on his side (a boon in Europe) and lined up against big banks the government here won’t break up. No wonder George Osborne sounds delighted this weekend.

While I very much doubt that Obama was thinking too much about Gordon Brown's political credibility when he decided to get tough with the megabanks (for better or for worse - probably worse since he's got just about everything else wrong since he took over), there can be no doubt whatsoever that Iain Martin is right and this is a disaster for a prime minister who, in his own fevered imagination, believes he - and only he - has the credentials to 'save the world'.
And Martin is right to say it's a gift for the Tories. It is, and for Britain too. Anything that helps to prick the Brown ego bubble and correct his (and Labour's) utterly dishonest narrative on his role in the economic crisis (for which he himself as Chancellor was largely to blame) can only be a good thing. Why? Because it hastens the useless old fraud to the political grave he so richly deserves and to which his passage is now long overdue. Two cheers for Obama, then.
Posted by Jon Lishman at 1/23/2010 08:24:00 pm