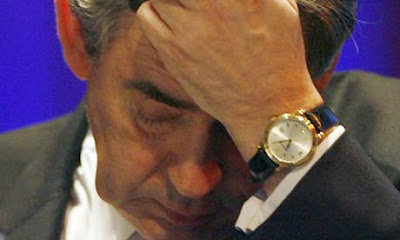 Brown: Game Over
Now we know the price for Brown of Wednesday's attempt to oust him. According to this morning's Times exclusive, Alistair Darling, in cahoots with Mandelson (naturally), has announced to the country, laughably, that we face "the toughest cuts for 20 years if Labour continues in office". Conclusive proof that Brown has lost the policy argument, but not to Darling and co, though, who went along with him for so long, but to the Conservatives. But Brown's lost a lot more besides.

The remarks suggest a big victory for Mr Darling and Lord Mandelson after the attempt to bring down the Prime Minister. Gordon Brown has apparently been dissuaded by two of his most powerful Cabinet colleagues from adopting a simplistic “investment versus cuts” election campaign associated with his close adviser Ed Balls.

Brown is a lame duck now, a prisoner in his own party who must ask permission of his Chancellor and Mandelson before he can do anything. Any speech he makes, any interview he gives and any Cabinet meeting he chairs will have to be given the green light by these two before they happen.

In other words, Operation Hoon was a 90% success; all but the last bridge fell: Brown's forced resignation. Why they didn't go the whole way and get rid of him was initially beyond me. That they kept him on as a puppet PM, as a hollowed-out figurehead, spoke to their bad judgment - and to their cowardice. They're all desperate not to be tainted with almost certain defeat. And then the penny dropped. That's why they kept Brown in place, neutered but responsible, so that he can carry the can and then disappear into US speaker-circuit obscurity. Silly me.

And clear proof of how low Labour has sunk. Pathetic.

And what of the lame duck? Well, Darling's words in particular will sting Brown most:

The next spending review will be the toughest we have had for 20 years . . . to me, cutting the borrowing was never negotiable. Gordon accepts that, he knows that.

Game, set and match, Mandelson/Darling. The coup was a success after all. Brown is no longer Prime Minister in anything other than unearned, undeserved title.

A momentous revelation, indeed. Not least because Labour, their depthless, delusional arrogance in thinking the country will stomach this finally emerging in stark relief, have just signed their own general election death warrant.

The one thing people like less than a divided party is a divided party without a real leader. Oh, and Mandelson is Prime Minister now, unofficially. This totally unelected serial liar is in absolute command of Britain for up to six months.