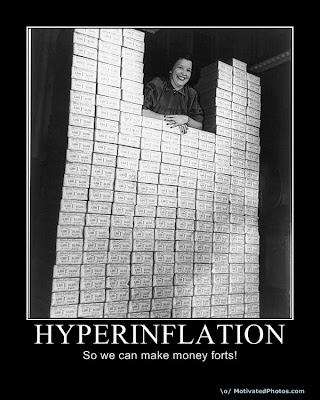 No one likes hindsight very much, but it really should have gone without saying in the first place that when you print 200Bn quid of unreal money just to keep going month to month, are running a record structural deficit and have public debt exposure approaching 1.5 Trillion, then you are running the severe risk of diluting your currency's value to the point where it begins to hurt the entire economy - and hurt a lot. With inflation having spiked by 1.0% in one month, which is the largest jump on record, hitting 2.9% just as the first signs of recovery were (allegedly) being detected, then no amount of spin can disguise the fact that Britain is in big, big trouble.

There is, of course, some suspicion that this is all part of Brown's 'plan' (if that is what it can be called): bankrupt the country now in order to buy some kind of election victory and then inflate away all the debt regardless of the huge amount of damage that that will do to the prosperity of private citizens, especially those who are wealth creators, self-sufficient (prudent), and savers. It will also impact heavily on home ownership, of course - which is why I suppose there has been all the clamour on the left for a return to council housing recently. All this is naturally a socialist's wet dream - and it is precisely the total basket-case calamity that Thatcher had to confront in 1979.

But if it really is that ruinous old bastard Brown's intention to turn back the clock to the 70s, with low or no growth, high debt, high taxes and high inflation (aka: stagflation), then even someone as self-serving and cynical as he is (beyond any shadow of a doubt) is in for a severe shock. First, it won't work because people are on to him: no amount of attempted vote-buying is going to win him the mandate he has never, ever deserved, particularly if his 'plan' is to catapult Britain thirty-five years into the past, back into the economic dark ages (although some might say he has already done exactly that).

Second, it won't work because of the sheer scale of the crisis. It is unprecedented, relatively speaking, not just in the history of Britain, but the history of any major economic power, in terms of the scale of the exposure to a possible economic tempest. QE, as Fraser Nelson (one of the very few MSM journalists who have been warning us about the inflation crisis following swiftly on from the damp squib that was deflation) has said time and again, is uncharted territory. It's a nuclear option; a highly experimental and untested method of dealing with a crisis the nature of which is most likely not completely understood. It is also a one-shot deal. If, as increasingly seems to be the case, Brown and Darling have, in fact, completely failed to plan for rapidly rising prices (or, rather, a rapidly deteriorating purchasing power parity), then whatever stimulated (fake) recovery they were hoping for will be choked off in short order. The danger of a double dip recession, that little old I (for one) starting talking about last May for heaven's sake, is now not so much a danger as a certainty. But while it's a familiar story so far as Labour is concerned, what is unfamiliar this time, as we roll our eyes muttering 'here we go again,' is that we will be entering the second recession with literally less than nothing left in the kitty. What must follow, regardless of Labour's lies, and thanks to their terrible economic mismanagement across the board, is a rapid fall in the overall standard of living. The rest of the world will not prop us up for much longer - and we have no more bullets in the gun.

Third, Brown's plan to inflate away Britain's debt won't work for the simplest reasons of all - the real-world economic ones. Let us say that by some satanic twist of fate Brown won the election, thus enabling him to continue to get away with QE for a bit longer (and that can be measured in weeks now rather than months), what are the eonomic realities that will hunt him down and expose him for the utter fraud and socialist economic illiterate that he is?

The simplest point is about levels of public spending. (I know you know this but writing it down helps me to get it clear in my own noodle!) As inflation continues to rise and money is worth less (expressed as price and wage hikes), people can buy less, economic activity is hampered because businesses are starved of cash and crippled by ever-increasing pay demands, and, of course, rising interest rates (as the BofE tries desperately to control the collapse) and, following on from that, the social security bill increases as a result of rising unemployment, an increase in income support costs (as more and more people fall into the poverty trap) and, as the spiral gathers pace, the subsequent increase in debt further devaluing the currency - leading to more inflation and even higher interest rates. Nothing personal, you see. It's just how the world works - no matter what your politics!

Point is, do not believe any of the propaganda from any of the politicians, but especially the socialists (many of whom quietly wish this calamity upon the nation for their own, peverse political reasons), because the signs are that these economic realities are already here.

There is nowhere for Brown (fortunately) or us (sadly) to hide any more.

A massive, unprecented, 1% inflation spike in one month is just the start of it. Batten down your financial hatches folks. This is going to be one hell of a storm.
Posted by Jon Lishman at 1/19/2010 12:50:00 pm