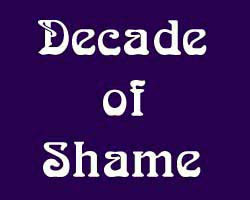 Being, as I was, virtually incapacitated by a stinking-though-happy hangover yesterday, I missed this excellent blog in the DT by David Hughes, cataloging quite succinctly Labour's decade of shame. Before reading it, however, (if you already haven't, that is), it's probably worth remembering that he's merely chosen a selection from a far wider, monstrous litany of abject dishonesty, perfidy and incompetence that characterises this whole period of "New" Labourism. He omits, for instance, the illegal Labour party funding scams and ultra-sleaze (Levy/Abrahams etc.), by the far the worst examples of corruption at the highest levels of government in modern times. There are many other examples, of course, not least the various PFI scandals. Even so, those that Hughes does list do not, as he says, make for 'happy reading.'

All governments get into scrapes, make mistakes, let people down – that’s the nature of politics. But it’s hard to think of any government in recent memory that has behaved quite so shamefully, quite so frequently, as this one. At the turn of the decade, here’s a reminder of just how low Labour has stooped.

1. Tony Blair led the country to war on the basis of a lie – the 45-minute dossier was a disgraceful manipulation of some very sketchy intelligence. More than 200 soldiers have been killed, a similar number grievously wounded, while tens of thousands of Iraqi civilians have lost their lives.

2. The suicide of Dr David Kelly after he had been exposed by Downing Stret as the source of leaks to the BBC about the soundness of weapons intelligence (see above). The most nauseating moment in this episode came courtesy of Alastair Campbell, an unelected Labour functionary, who summoned a press conference to crow over the findings of the Hutton inquiry into Kelly’s death which inexplicably decided it was all the BBC’s fault.

3. Tony Blair’s warmongering extended beyond Iraq – there was Kosvo, Sierra Leone, Afghanistan – but a common theme was that British forces were routinely expected to put their lives on the line with inadequate kit and equipment. Much of the responsibilty for that lies with Gordon Brown who, as Chancellor, just did not “get” the military.

4. Brown’s uncontested accession to the premiership – after years spent undermining Blair – revealed just how rotten Labour had become. This was more akin to the Politburo than a modern democratic party. The one consolation is that it has proved an unmitigated disaster for Labour.

5. While Chancellor, Brown perfected a whole armoury of tricks to obscure what he was actually doing – double and triple counting, endless re-announcements of the same policy, stealth taxes by the score. So intent was he on his smoke and mirrors games that he seemed not to notice he was sending the economy down the tubes.

6. Bernie Ecclestone’s £1 million donation to Labour was an early indicator that Labour’s moral compass was non-existent and that Blair’s claim to be a “pretty straight kind of guy” was to be taken with a sackful of salt.

7. Parliament under Labour has been utterly marginalised. Both Blair and Brown have treated the Commons with contempt and we now have the weakest (as well as most dishonest) legislature in memory.

8. Labour’s failure even to attempt to control immigration has led to profound changes in this country that people did not want. Yet any attempt to debate the issue was branded racist by Labour – until it finally dawned on them (far too late) that their own supporters were furious about the changing nature of their communities.

9. A spending binge without precedent in this country’s history has delivered the most paltry improvements in the public services. A great opportuntiy to modernise Britain has simply been frittered away.

10. Labour’s Big Brother intrusiveness into all aspects of our lives is without precedent outside communist or fascist regimes. A government that has trumpeted its commitment to human rights has systematically eroded them.

It doesn’t make happy reading, does it?

I still think that when the campaigning for the general election begins in earnest, and some might say it did today with Cameron's excellent speech outlining what his party would do to bring some basic honesty and accountability back into politics, the dwindling number of the Labour faithful will realise that they are deservedly facing absolute catastrophe - at least for Labour, though certainly not for the country - and that the only way to avoid total meltdown in a defeat that will surpass, in terms of scale, the Tory rout of '97, is to oust the chief architect of their (and our) calamity, Brown. Otherwise, I'm now totally convinced that they will be wiped out for a generation or more.

But don't take my word for it, even Polly Toynbee agrees with this view for heaven's sake! So let's hope they do an impression of the dodo and stick with the fraudulent, hypocritical, mendacious old wrecker.
Posted by Jon Lishman at 1/02/2010 05:15:00 pm