The Spectator Comes Clean (It's "Frustrated" With Cameron) 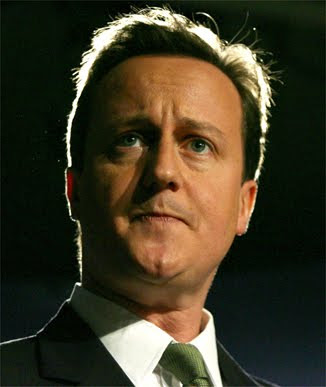 If you don't vote for this guy, you'll have five more years of Brown. The horror!

I've been slightly bewildered by some of the coverage of the recent outbreak of electioneering, especially from what might be termed - loosely - the 'right' media. You have the Telegraph suffering from its now familiar identity crisis, with nonsensical, Brown-loving, left wing articles from the likes of Mary Drivell popping up every week to hammer David Cameron for things he hasn't done yet - or ever even promised to do, for that matter. And you have the ghastly Mail, with its endless, dumb assaults on Cameron from the likes of Littlejohn and, less frequently these days, Peter Hitchens, presumably for not being Maggie Thatcher. Then again, perhaps we shouldn't be surprised about these papers' confused, convoluted editorial stances; they've been that way for some time now after all - rather like some sort of right wing Guardians, and just as muddled-up.

No, the bewildering source of vitriol, at least since Cameron launched the Tory campaign to save us from five more years of a trainwreck, catastrophic, final incarnation of a long-dead Labour government, has been the Spectator, an outlet I had hitherto imagined was one of the last sensible political commentary providers extant. Not so. In an extraordinary editorial volte-face, its new(ish) editor, Fraser Nelson, who, in 2009, managed almost single-handedly to force Gordon Brown to admit that he had been planning public spending cuts all along and had been deliberately misleading the country about his real intentions, has turned on Cameron in true, spiteful Daily Mail style. A couple of articles spring to mind, but this one in particular, originally written a couple of days ago by Nelson for the News of the Screws, apparently (it does read like a bit of a plug, actually). It contained a lot more than a mere expression of disappointment at what he regarded as Cameron's failure to be 'bold' enough in what everyone seems to think was his campaign launch, it contains a bizarre personal attack on the Tory leader himself in which Nelson describes last Sunday's speech as 'vapid nonsense' (it was not).

Well, this evening we have finally been given at least some form of explanation for Nelson's sudden change of direction by one of the Spectator's better writers, David Blackburn:

Ok, Coffee House has given the Tories short-shrift in recent weeks, but this is a reaction born of frustration. The election should be a walkover. At their best, the Tories have the radical policies, and to a certain extent the team, to rescue Britain from its current Labour-inflicted quandary. Yet the party remains tentative, fearful of its own shadow.

It should not be. Labour deserves to lose, and not only in retribution for its record: the governing party has embarked on an open internecine war and is completely unelectable in consequence. Rachel Sylvester describes the paralysis:

‘Lord Mandelson is advocating a campaign based on aspiration, public service reform and fiscal rectitude, Mr Balls would prefer to pitch Labour investment against Tory cuts, with a liberal sprinkling of Eton-bashing. It’s essentially the difference between a “core vote” strategy and an approach designed to appeal to “middle England”. Although it is too simplistic to define it as old Labour v new Labour, it is a struggle for the soul of the party that will only intensify if it loses power.

Gordon Brown is torn. With his head he knows that he should side with Peter, but in his heart he agrees with Ed. The tension was all too clear in his media appearances on Sunday. In an Observer article, he called for an “age of aspiration” and referred to “new Labour” five times. Then in a BBC interview with Andrew Marr he emphasised tax rises for the rich, refused to discuss spending cuts and defended his class war attacks as “a joke”. No wonder the electorate is confused. Labour’s message is inconsistent because the leader is trying to follow two paths at the same time.

The result is incoherence. One week Lord Mandelson waves the axe over universities, the next Mr Balls lavishes more cash on schools. Labour accuses the Conservatives of having a £34 billion black hole in its spending plans but it has no credible explanation for how it will fulfil its own promise to halve the deficit over the next four years.’

"It (a core vote strategy) certainly does not represent Labour thinking or our strategy. Of course, we want to retain the vote that is most loyal to us but we are not going to win the election on that basis.

"We have to reach out to the whole of the New Labour coalition that brought us support in the last three elections and without which we will not win the next."

The similarities with Major’s stricken party are palpable. That the Cabinet has turned on itself testifies to the depth of Labour’s affliction and the vacuum at its heart. Annihilation should be a matter of course.

Is that it? I mean, I can understand there might be some 'frustration' at the Tories' failure so far to get the message across, sending Labour to sub-zero in the polls (I even share it - who doesn't!). But hang on a second, we are five months away from the election. Do Fraser Nelson and his new underlings want an entire Conservative manifesto, complete with full costings, immediately? It seems so. Well, right now Cameron should ignore them and get on with hammering Labour - and Brown particularly - for their - and particularly Brown's - appalling record, for their incompetence, for lie after lie after lie, and for the deep misery they have inflicted on a country they have managed once again to bust. That's priority number one. The manifesto should be months away.

It seems I might be the only one who thinks Cameron and co. are basically driving the news agenda now and are doing a pretty good job of it, admittedly with some errors (which is to be expected). The way he and Osborne dealt with the Treasury's smearing, "dodgy dossier full of lies," a Ballsian Labour creation enabled by the abuse of access to impartial civil servants, turning them into little more than politicised smear-slaves, was impressive. (No wonder Darling looked uncomfortable about it all, but he's still going along with it, so no sympathy from me.)

However, that individual policy decisions have not yet come fully into focus should not be any cause for alarm or hostility from what has become a ravenous journalistic class with a lot of column and blog inches to fill. They're getting well ahead of themselves, of the process - and doing their readers a serious disservice into the bargain. The policy issues will be resolved weeks and days before the election, not months before it, for heaven's sake.

Suffice to say, people like Fraser Nelson should know better. I had thought he did. Seems I was wrong.

PS: Iain Dale wrote something very interesting yesterday on the subject, among others, of the dangers of premature electioneering and the Tories' domination of the news agenda. Read it here.
Posted by Jon Lishman at 1/05/2010 06:16:00 pm