A beautiful NASA satellite photo of the British Isles (courtesy of Prodicus)... 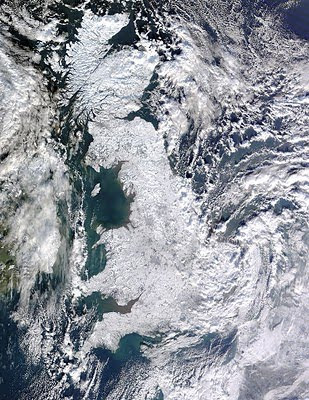 ...and it's still getting colder. But it is certainly beautiful - beautiful and deadly, unfortunately.

I'll tell you the truth. The climate has certainly changed over the past few years - it's got significantly colder. Why? No one knows.

But while our governments continue to follow the corrupt scientists still stubbornly pushing the debunked theory that was anthropogenic global warming, people will just have to fend for themselves. The entire Northern Hemisphere is frozen and idiot governments around the world still refuse to halt the suicidal policy of emissions capping.

Meanwhile, just to meet ridiculous, arbitrary targets derived from junk science and pushed by misanthropic delusionals, we have been growing less food, replacing crops with subsidised biofuel for instance, just when that food was needed most. Result: scarcity, record grain prices and, inevitably, starvation among the world's poorest. We are discouraged from burning coal - which is still plentiful, especially where I am (and the 'cleanest' in the world). Result: energy dependency, massively high fuel and energy prices and, inevitably, death among the nation's poorest and most vulnerable. We waste vast amounts of resources on alternative energy systems that don't work. Result: well, look around you. If this cold snap goes on much longer, we'll run out of energy altogether, having failed to fix the roof while the sun was, quite literally, shining. Again, the nation's poorest and most vulnerable (especially the old) will simply die off.

So you see, the ecofascists of this nation and this world already have a hell of a lot of blood on their hands and nothing they say or do from now until doomsday (itself a concept with which they are tellingly obsessed) will ever compensate for their crimes against humanity.

The sooner these criminals are brought to book, the sooner the world can be fed, warm - and sane - again.

PS: If you're a fan of the ice, you could always join these guys' protest against global warming... 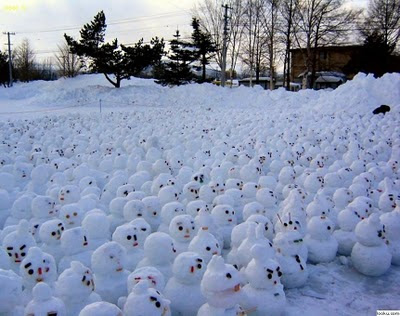