Beeb Goes Into Bat For Brown 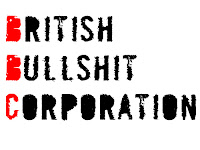 It's pathetic, really. The BBC has made scant reference to today's Euro and local elections (unlike Sky). In its two online articles on it, one talks about the folded ballot papers that have apparently hurt poor old UKIP, although Guido seems to think there's been other dirty tricks by Labour activists. The Beeb then poo-poos the idea of a high turnout in its second article (a high turnout would be bad news for Brown).

At the last European elections in 2004, turnout in the UK was 38% - across Europe the average was 45.5%. There have been predictions turnout this time it could be as low as 28%, while others believe it could be up to 50%.The Press Association says 52 people out of a possible 2,255 voted in the first two hours at a polling station in Streatham, south London, which it says suggests a turnout there of less than 25%.

Un-be-lievable. Top analysis, that. No, really. Its TV coverage is, if anything, worse.

But the worst bit of abject politicking for Labour by the Beeb is found in this article about Lord Mandelbum of Spin's desperate attempt to head-off the growing backbench rebellion threatening to unseat his doddery benefactor and source of his bread and butter, Brown. Entitled, ridiculously, "Allies of Brown go on offensive", it reads like a threatening message to party dissidents rather than a piece of independent, informative journalism.

But the real scandal in its coverage of the elections, buried away as it is in its Politics section, is that on the front page not one story out of 25-odd makes reference to any of the challenging parties. There are one or two general, technical bits. Nothing else.

So, according to the BBC narrative, there will be a low turnout in some not-very-significant elections, Brown's allies are in charge and Brown is out of the woods and carrying-on. Well, I for one believe that however they try to play things down, with the help of Auntie Beeb of course, Labour are in for an epic shock come the count.

Am I being paranoid? Probably - a little bit. And if you think so, click on the links and form your own opinion. Just remember, the BBC has real form for this kind of thing, as first rate Beeb debunkers, Biased BBC, will testify - at length. If you lived off a diet of pure Beeb bullshit, as many do - worryingly - you would be left with the distinct impression that life under Labour might be a little bit tricky right now, but is basically absolutely wonderful. A bed of (red) roses, no less.