Purnell Steps Up And Steps Down 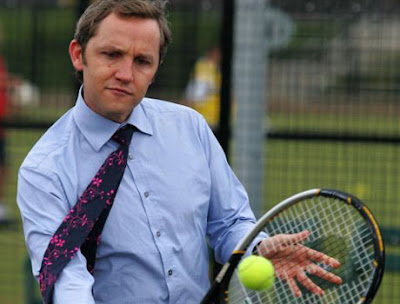 Purnell: Back-Handed Smash
Sky is reporting that James Purnell has resigned and called on Gordon Brown to quit.

Work and Pensions Secretary James Purnell has resigned from the Cabinet and called on Gordon Brown to quit.
Mr Purnell said he no longer had confidence in the Prime Minister and said he should step down for the good of the Labour Party.

==Update==
As a parade of hopeless Labour MPs and pisspoor ministers (Jim Knight, for instance) come on Sky to moan about Purnell's 'treachery', the Gruaniad takes-up this delightful story:

James Purnell, the work and pensions secretary, tonight dealt a monumental blow to Gordon Brown's chances of holding onto office when he dramatically announced he was quitting the cabinet and asking Brown "to stand aside to give Labour a fighting chance of winning the next election".

His statement, effectively declaring Brown as unelectable, will further weaken the prime minister's waning authority and takes the challenge to his leadership to a new dangerous level. Purnell made his sensational move after polls closed in the local and European elections, informing Brown by phone tonight.

The prime minister had no inkling that Purnell was going to quit, since the work and pensions secretary shrouded his move in secrecy in order to prevent Number 10 mounting a pre-emptive strike against him, or seeking to challenge his motives.

A spokesperson for Purnell said: "He feels Gordon should now stand aside to give the party a fighting chance of winning the next election. He is not seeking the leadership nor acting with anyone else. This is not about jobs or careers."

Now we know where the leaks were coming from.

It's going to be a long, long night for Gordon Brown.

==Update 2==
A long, long, long night! The Speccy says the word is out that Dave Millipede is going to quit tomorrow. He's prepared his resignation speech. Here's a preview:


Hoon. But a useful hoon if the rumour is true.

==Update 3==
Well, according to the Spectator Millipede is not going to resign, apparently. No doubt the rumour was just a ruse to force Brown into letting him play with the Foreign Office for a little bit longer. Pathetic. What an absolute shower this bunch are.