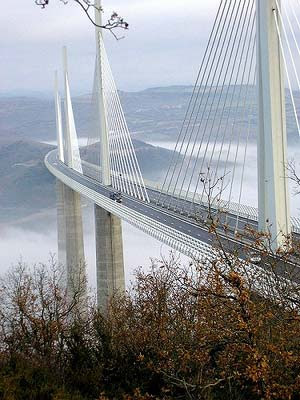 We couldn't build a Millau Viaduct

The weekend section of the Torygraph contained one the most prejudiced, petty and perverse comments I have read in quite a long time. Why the writer, Anthony Gardner, felt the need to include it in his otherwise reasonably decent article about French education is quite beyond me. The quote, from some ditsy PGCE-fodder named Louis Burnett-Hall, does serve a purpose, however. It perfectly encapsulates the reality of education in Britain today: because inadequate idiots like this one have a say in how our children are taught, this country is producing a generation of under-educated, maladjusted depressives.

But make your own mind up, do:

Louisa Burnett-Hall, who trained as a teacher in London before moving to Paris, believes that high French exam results come at a personal cost. “If the ideal in British education is to produce a happy, well-balanced child who reaches his or her full potential, the French ideal is simply to instil knowledge. The idea of having fun doesn’t exist."

A "personal cost" for God's sake. That's the whole point. If you instil that discipline into children they will achieve all that they can to the best of their abilities. Teaching a child that nothing comes easy and nothing is free is the only way to "produce a happy, well-rounded individual". Learning how to make a serious academic effort is not "fun" (at least at first. With an inspirational teacher in charge, it often becomes fun, though. That's the joy.). You have, as a teacher, done your duty if you have unlocked a child's latent talents. But that comes only with an enormous effort of will on the part of teacher and child. That will can never be generated by a teacher who is more worried about spurious child psychology theories than the information they are ostensibly paid to transmit. The will is unlocked by the process of learning, but only through bloody hard work.

Fail to show children the level of commitment necessary to make the most of their strengths and you have betrayed them. You do not deserve to be a teacher. French teachers know that. Unlike their politically indoctrinated, fun-loving, woolly-headed counterparts in Britain, they know that there are certain places sociological experimentation cannot go. One of those places is the classroom. No doubt to say this is a thoughtcrime nowadays, but true education is all about "elitism", because that always has to be the aim: to be elite. And believe me, children understand that completely. If you teach a child that it's OK to fail then you might as well take that child out of school and put him directly onto welfare (which is something many young girls do themselves anyway in Britain now).

I'm not going to bang on about this much more. It's too depressing. Besides, it just confirms what I've always suspected: of course with many exceptions, British teachers are fundamentally lazy - intellectually, morally and practically. That laziness is basically the only thing they transmit to our nation's most precious resource, our children. And then they justify their failure by saying success is just too hard to reach and shouldn't be forced on the young. So while the Grandes Ecoles churn out happy, well-balanced experts in their fields who build French nuclear power stations and the large hadron collider, or who choose to commit themselves to passing on the benefit of their studies to a new generation of French young, we have to bring in Americans to build the useless Dome and Australians to build the underwhelming Wembley. We build wobbly foot bridges. France builds Viaduc de Millau Bridge. I watched this excellent documentary last night about the North Sea oil boom. I am certain Britain simply doesn't have the expertise any more to pull something like that off again. And that is the result of a corrupted education system that has failed and polluted our children. (There is one, simple word that explains everything you need to know about how and why this has happened: Labour!)

Suffice to say, if you think, as this Burnett-Hall fool does, that the only way to produce "happy" and "well-balanced" children who reach their full potential is by wrapping them in left wing cotton wool, then there is no hope for you. You must have been educated in Britain. If, however, you recognise that the only way to turn children, who crave structure, leadership, discipline, knowledge and, above all, a real challenge, into "happy", "well-balanced" adults (who really do reach their full potential) is by supplying them with exactly what they crave, then congratulations. France might let you be a teacher in one of her schools.

PS: If you have ever seen the wonderful, moving Être et avoir, you will know precisely what I mean.