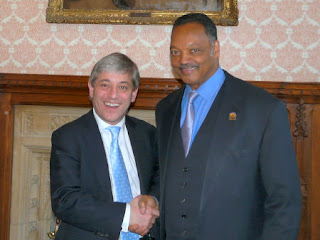 So Labour's latest stitch-up is now under way. With rumours of whips being sent out to try to bully Labour MPs into voting for Beckett (God, not her!) reported in the Times apparently proving to be without foundation, it seems today's Guardian was right after all: there has been a plot in Labour's ranks to install the weakest Tory candidate, someone they will be able to push around, someone who is sympathetic to Gordon Brown's fake 'reform' agenda for the House of Commons and someone who allows them to tick the "Tories turn" box, thereby heading off that fair criticism (which Beckett's election would have generated).

Widdecombe looks out of it, which is a shame -she would have been colourful - but Young and Haselhurst are still in, so there's still hope that the nightmare scenario of Bercow or Beckett might yet be averted. I've crossed everything crossable.

All the others are most likely out, according to Sky's MP twitter.

Update 7.14pm
Some MP's just twittered:
"Some people are saying Bercow is a dead cert. Others not so sure. But Beckett and Beith's votes will mostly go to him."
Dammit.

Update 8.28pm
Jim Knight MP has just twittered that it's a dead heat! The daddy of the House gets the casting vote in that case. Cool...