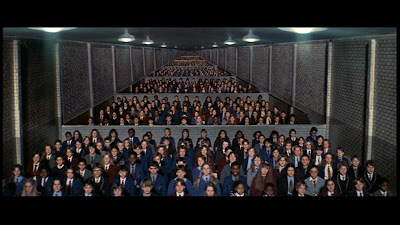 Bricks in Labour's Wall
"We do need some education. We don't need no thought control."
I am pretty privileged on this blog because I seem to attract comments here that are remarkably enlightened and enlightening and I am grateful for them. A stand-out example is this one from a contributor who goes by the intriguing handle, Black Hole Sunset on a recent rant by yours truly about eductation. Here it is...

No mention by Burnett-Hall of the sense of fulfilment and satisfaction that comes from successful study - from simply knowning more than one did previously. No mention of the happiness and natural balance that comes from leading a productive life, from being able to provide for one's family and friends - and, as an aside, providing for others via the tax system.

"The élite here is still following an academic path created by Napoleon to produce engineers for his armies." - this is supposed to count against the French system? The truth is that most people are not the son or daughter of a career artist (perhaps Burnett-Hall appreciates this but her remarks were taken out of context - or perhaps the Telegraph just wanted at least one contrary opinion but could only, by definition, find a prejudiced idiot to supply it).

For the majority, a high quality education that instills discipline and provides a credible career path would be a dream come true - we can't all be, or would even want to be, artists. Very telling that everyone else they spoke to did almost nothing but heap praise on the French system.

That documentary about North Sea oil (including the first part, which is also knocking around on iPlayer) was absolutely brilliant, and very moving! (I missed it in the listings so thanks for pointing it out) As you say, we couldn't build the Millau Viaduct (just imagine the PFI disaster that would result if we tried) and probably couldn't duplicate the feats of the North Sea oil pioneers either - very sobering to learn just how crucial American money, expertise and bravery were to the whole endeavour, and how poorly thought of were the local workforce.

Education underpins the whole of society, the only thing I can think of that would halt our disastrous slide into mediocrity would be one or other of the various voucher schemes that have been proposed - where parents can decide where they want to apply and schools can compete for the business - no students, no revenue. I would also be inclined to allow schools to select on whatever basis they want (provided their criteria fall within the same bounds that private sector employers are allowed to apply).

I think that part of our problem is that we have a government, and particularly a civil service, which has no real competence in many of the areas in which it must operate (IT, construction, health care, education, utilities etc). They seem to think they can remedy the situation by 'outsourcing' competence, but this is just an invitation to get ripped off by spivs (they also can't tell who is, and who is not, a spiv). I think this is the reason why we've done so badly out of Browns PFI fetish - there is no one in government qualified to negotiate PFI contracts because they have no in-house competence or expertise.

They are literally incompetent, as far as I can tell - which would would explain a lot!

Suffice to say I find it very difficult to disagree with any of this. Education does, indeed, underpin the whole of society. Not the NHS or the welfare state, education. That's the sole, key premise from which all our politicians should operate. Until there can be political honesty about the disastrous education policies successive governments, but especially Labour governments - brim-full as they have always been of totally arrogant, privately educated, pseudo-intellectual socialist nobility (Shirley Williams, anyone?) - have imposed on this country, there can be no hope of solving the problem that is Britain's accelerating slide beyond universal mediocrity.

There is one policy that any Conservative government must immediately pursue in order to begin to attempt to reverse the process. It must purge the education system from top to bottom of Marxist/socialist ideologies, which have a proven track record - of failure. First, that means comprehending those ideologies and just how deeply they have penetrated education and society generally. That means taking-on the places where they have been propagated for so long: universities and their teacher training schools (as well I know from unhappy personal experience).

Next, the tearing-up of failed educational theories, created by left-wing doctrinaires contemptuous of anything they view as old-fashioned or traditional ("bourgeois" and "hackneyed" in their bankrupt language) or, heaven forbid, "elitist" (competitive). These parasitical theorists usually had or have little or no practical experience of their own to inform their judgment, just an agenda, with the predictable consequence that their harebrained notions in action have served to generate a national emergency.

Children, for example, are naturally competitive and it is intellectually dishonest to suggest otherwise. Let them compete. Harness this urge, don't slap it down. Denying a child the right to compete - the chance to excel - is a betrayal and no adult, be he or she a "trained" (nowadays that simply means "indoctrinated") teacher or university educational (so-called) expert or not, has the right to cause such irreparable damage. Yet, that is precisely what they have been doing for a generation with the result that we now have hundreds of thousands of undereducated young adults wondering around the country, with no clue about their own capabilities and no idea how to survive a recession. (The bright ones who survive the system simply leave. Again, personal experience sadly informs here. If the proportion of my brighter friends - and I am just an average Joe - who have abandoned Britain to its fate is multiplied across the country, then the unreported brain drain under this Labour government has been and is currently at epidemic levels).

Labour in particular, and Marxism-socialism generally, has betrayed these people in the worst possible way: by constantly meddling with and corrupting children's natural rites of passage by contaminating their minds with things they do not need to worry about until they are adults, while deliberately neglecting the academic content children so desperately need and yearn for, and from which so many socialists - the Fiona Millars of this world - are loathe to admit, themselves benefited. Because this calamity has become so entrenched, I hope it's appreciated it's too complicated to set-out in one short blog post. Suffice to say, what children now need is a long break from the hypocrisy of not-so well-meaning Marxist-socialist adults - like Millar.

Purging the nation of these evils will be difficult - they have taken root. But it is essential if the nation is to survive in anything but name. Tories: you have been warned. Let's hope Black Hole Sunset isn't right about at least one thing he/she suggests, that the competence needed even to comprehend the need for, let alone launch, this titanic change of direction no longer exists in Britain today. If it doesn't, the game's over.
Posted by Jon Lishman at 6/29/2009 04:03:00 pm