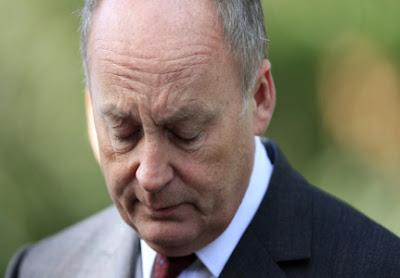 JudasShaun Woodward: seated at the Gord's Left Hand in PMQs. A lot on his mind.
What a morning, then. Brown barely limps-on having been savaged by a chipmunk and a pair of foppish toff scunners, relying now on those personifications of loyalty, Peter Mandelson, Shaun Woodward and Ed Balls, as his loyal crutches - and now we hear rumours from Guido that Madame Flint is about to snear her way into political oblivion too. All we need is for Ali Darling to be strangled by his own eyebrows - they've always been at odds with the rest of him - for an almost perfect day to be complete.

But I'm not so convinced that even this cabinet vaporisation and the ebbing away of his control of the tainted resident Blairites will do for Brown. The fatal blow will be struck by the Left. And now the Guardian has unearthed a gathering of names, no less. The Spectator has it:

Allegra Stratton and David Hencke have the scoop over at The Guardian:

A group of rebel MPs have begun soliciting signatures for a round robin letter calling for Gordon Brown to step down, which they plan to hand to the prime minister after the results of the local and European elections have come in on Monday morning.

The Guardian has learned there are reports that the backbenchers think they can reach 70 or 80 signatories, with some claims that the letter could be delivered to Downing Street by the end of today.

Some backbenchers have seen the letter and are not signing it on account of a perception that the names already on the list are "too leftwing".

The pair report that all this is being done by MPs sending a message to an email address. What should worry Brown about this is that it shows that the left are mobilising against him as well. Things are moving fast now.

The real challenge has always been from that direction. Disaffected and betrayed, the Left have had enough. They will challenge - and they actually know the labyrinthine party rules. For me, though, this indicates it's not only game over for Brown, it's game over for Labour. Quite simply, through cowardice, denial and basic stupidity, they've left it too late.

Even if (when) they oust Brown, Postman Al will not be able to save the party from descending into factional disarray, with an emboldened left wing holding a paralysed leadership hostage to fortune up to the next election. If they think their performance in tomorrow's polls will be bad, then they're in for one awesome shock come the (now imminent) General Election. And they only have themselves to blame for that.