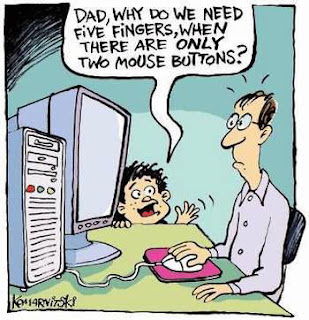 So Brown has out-gassed another of his content-lite, jargon-heavy, meaning-less, bullet point articles today, this time for The Times. You can read it here if you really must. Take my advice: don't bother.

This time his now traditional journey through the world of argumentative fallacy begins with the wonderfully banal assertion that "the internet is as important as water and gas". This is wrong on so many levels a blind man could have seen that it is no place to open a debate on broadband. But no, Gordo not only can't detect that this piece of nonsense is shoot-self-in-both-feet bad, he puts it at the top of the page and at the heart of his argument. Well, falsus in unus, falsus omnibus. The remainder of the article from this ridiculous start point invariably and quickly descends into the absurd. But is there method in the madness? Here's a couple of examples:

...a fast internet connection is now seen by most of the public as an essential service, as indispensable as electricity, gas and water.

Where do you begin? This sentence alone is so flawed as to render it literal nonsense, nearly. There's the red herring argumentum ad populum in the subordinate clause ("is now seen by most of the public as an essential service...") a.k.a., "weasel words". Mind you, I suppose one could expect this to hiss out of the hot air hole of such a self-regarding politician. It's an appeal to the false authority of so-called 'common knowledge'. This kind of thing pollutes so much debate nowadays, it's difficult to imagine a situation where you would not hear it, especially in politics. It's important to remember, you see, that even if a huge, Census-style survey of the views of every internet user in the country had been undertaken, at great expense, the phrase 'is now seen by most of the public' would still be a red herring (no attribution and a probabilistic uncertainty).

The best you could offer would be "...the recent Census shows the internet is now seen by most internet users as an essential service...". That would be 'most of' about 40 million people - barely more than half the population and therefore inconclusive. However, since the article restricts itself to 'fast' internet connections, logically the survey must confine itself to internet users with fast connections - about 15.8 million people as of Nov 2008. Result? While this notional Census would show, we assume, that 'most of' those 15.8 million broadband users would view the internet as essential, that would represent only about 20% of the population - hardly 'most people'. In other words, it's nonsense.

Aside from the fact that everything else he says in his piece, using this faulty thinking to justify it, is therefore deeply debatable, there is the question of 'real motives'. It stands to reason that if it improves the population's quality of life, improvements in communications technology are obviously desirable, Brown's laughable hyperbole and woolly thinking notwithstanding. What I want to know is, why does he almost always choose to frame arguments in this way, a way which serves only to leave me (I can't speak for anyone else because I can't read minds, unlike, apparently, Brown) feeling pressurised, antagonistic and, frankly, irritated!

Yes, I do have better things to do, but I want to look at a couple more of Brown's statements in this article before I sign off on this entry because they appear to reveal what readers will possibly already suspect is his true motive (ie: not the promotion of 'superfast broadband' for its own sake) for this, his fourth major 'policy announcement' of the past seven days, the others being the Mail Privatisation climbdown, the ID card U-turn review and the new Iraq whitewash inquiry.

Digital Britain cannot be a two-tier Britain - with those who can take full advantage of being online and those who can't.

This is the political - the real - message which explains why the opening fallacy of the argument, that a fast internet connection is as important to life as water, was necessary. If broadband is only 'desirable', then it's very difficult to make any political capital out it. If it is essential to life, then it becomes an egalitarian issue - a social issue - and only one party has the credentials to deal with that, so goes the thinking, and that's Labour. The statement "digital Britain cannot be a two-tier Britain" (apart from suggesting a whole bucketload of implied fallacies, not least the familiar Brown-Ballsite mass ad hominem against non-Labour, cognitive dissidents, to coin a phrase) is therefore an extremely divisive, deliberate and quite cynical type of 'thought capture'. The idea is that somehow investing in and upgrading IT infrastructure immediately grants the state authority over how that infrastructure is used is disturbing, but that is what Brown is saying - and I think that, beyond the attempt to out-manoeuvre other political parties on the issue, he actually believes it.

To extend another of his false analogies in this piece, it's a bit like saying the government built the railways so the government has 'the right' to say which people can use trains. It is a small step from this position to a position where the state not only dictates who uses the trains, but how and when they use them. Oddly, though, Brown does not appear to be arguing that trains should be free to all to correct the situation we now have, to paraphrase him "...with those who can take full advantage of being on [the mainline] and those who can't". If infrastructure like gas, electricity (I'll do Brown a favour and leave out water) - and the railways - really are 'indispensable', how can he allow the situation where millions of people cannot afford to travel by train to continue?

The answer is, of course, that this is nothing to do with consistent reasoning from a position of principle (however muddled that principle might be), this is merely about political gain. So don't be fooled by the babbling, the hyperbole and the nonsense. The only thing to be genuinely concerned about is this:

We must also introduce a robust legal framework to combat digital piracy and secure the rights of Britain's creative talent.