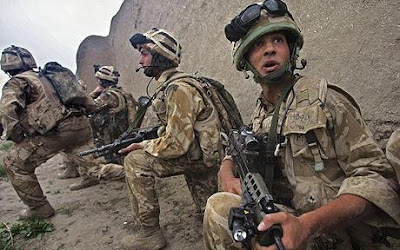 The Telegraph has revealed the latest government minister to have lined his pockets at the taxpayer's expense. He is Bob Ainsworth, the Armed Forces minister. He "claimed nearly £6,000 for the redecoration of his designated second home, submitting bills that included rebuilding the fireplace and fitting oak beams into his ceiling," the Telegraph says.

...[he] also tried to claim £2,225 for a sofa and £1,000 for a LCD Samsung television, both of which were reduced by the fees office. According to the Green Book of parliamentary rules, MPs are not allowed to claim “the capital cost of repairs which go beyond making good dilapidations and enhance the property”.

And so it goes on - and on and on and on. I suppose it's worth noting this man is also a serial flipper who, as has become the norm, denies he's done anything wrong.

So why bother bringing it up, then? Well, this case is a lot different in my opinion. While this man was busy doing-up his house with oak beams and artex or whatever it was - paid for by us - the troops in the field for whom his department has a duty of care are badly-paid, ill-equipped, over-stretched and under-fire. They are fighting and dying in Afghanistan while he is troughing away merrily, beautifying his house so he can sell it on, turning a profit and rubbing his hands. While the lions of Britain and their families are forced to live in damp, cheap, dilapidated accommodation on ancient bases, one (probably all) of their ministers of state has been filling his bank account by playing a property game that tax* on the fighting soldiers' income has helped finance. (*It's worth remembering American soldiers do not pay income tax while on active duty, unlike their British counterparts.)

This isn't merely a disgusting insult to the armed forces Ainsworth represents, it's a betrayal. It reveals the most serious breakdown in basic morality at the heart of the British government. You would need to go back to the days of the Napoleonic Wars and the mutinies in Spithead and Nore in 1797 to find some sort of historical comparison for this kind of corruption, at least in terms of the yawning moral gulf that has opened between rulers, ruled and the guardians of the land. The rulers are filling their chests with the nation's treasure while the people and the armed forces are expected to make do and do as they're told. Naturally, 212 years on, there are differences. But the underlying symptoms indicative of the decadence of the powerful in this country are the same.

So if this Ainsworth character is not removed from his post immediately, our forces in combat would be perfectly within their rights to stop fighting as far as I'm concerned. They should go all the way and consider their service abused, the military covenant broken and refuse to fight until this parliament is dissolved and a new parliament elected. Of course, they will continue fighting because they know what's at stake. Besides, their loyalty is to the country, to the Queen and to each other, not to Bob 'Oak Beams' Ainsworth or Gordon 'D-Day Invite' Brown.