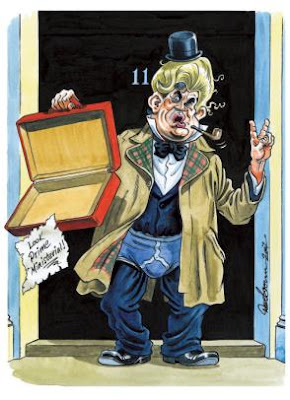 Cuts in government expenditure is one issue that has dogged the Tories for nigh on a decade of Brownian dictatorship. As long as Brown was able to fool people into thinking that there was endless money available for massive growth in government spending, then any Tory even suggesting that it was not only desirable but essential to peg back what they argued was an unsustainable expansion of the state was laughed off the stage. Not any more. The bust has come and Brown has not only been made to look a fool, his mismanagement of the economy has been revealed in all its stark reality, with the consequent pain being felt throughout the country. [Check out this devastating article in today's DT, if you want to know how bad that pain is and how much worse it is going to get.]

The Tory predictions of the 2005 general election have come true in spectacular fashion. As Mervyn King said only yesterday, running a structural deficit during what turned out to be little more than a property bubble - ie, a period of unsustainable growth - has just about ruined the UK. The myth of Labour's reputation for economic competence has been exploded once and for all. All we have had, in fact, is a near ten year explosion in state spending with little or no return in terms of improved productivity in virtually every targeted sector. In fact in some areas, such as the NHS and schools, standards have fallen, despite gargantuan chunks of money being thrown at them. One area where there have been improvements, if you can call it that, is in state wage levels. An NHS GP can now earn twice as much as an MP; a state school teacher in his first year, after gaining a fairly modest degree followed by a year of PGCE indoctrination, can expect to clear £30,000 plus, depending on the school. I simply do not believe these people are worth that kind of money. (I know from my own experience that many NQTs certainly aren't!)

It's difficult to cut state salaries, but they can and must be capped. That will help, but genuine, capital cuts are also required if the country is to avoid a return to the disease the last Labour government caused: stagflation. Brown has lost the argument on cuts - even his own party knows that now. He has been caught out lying about, among many other things, Labour cuts, something for which he will never be forgiven. Further, the mood of the public has altered and there are signs that Tory proposals will be taken seriously, as long as they are constructive. There is such a thing as constructive cuts, as long as the new spending levels are managed professionally, something which has been sadly lacking in the chaotic Brown years of profligate waste and corruption.

Fraser Nelson this a'rtnoon has written another decent piece on this subject. I like Nelson, by the way. If Guido caught Brown out on the smears thing, it's Nelson who's really got him on the economy - and deserves as much credit as the former got for his expose. In his piece today, though, he made some interesting observations about how the Tories might re-organise goverment spending in their first years in office, which are likely to be, thanks to Brown's nation-breaking levels of borrowing and debt, extremely difficult (no change there, then). According to Nelson, however, the first thing to reconstruct will be the mechanisms of cabinet government smashed to pieces by Brown as a consequence of his dictatorial style of what can be loosely described as leadership "where ministers are handed their budgets and told to eat it."

Here’s how it would work. The spending envelope would be set, in the Budget – but it won’t just be the Chancellor demanding cuts. The Office for Budget Responsibility would be up and running too. Very little attention is being given to the OBR, perhaps because it sounds like some spivvy quango which will be an irrelevance. But Americans perhaps thought that about the Congressional Budget Office before Nixon set it up in 1973 – it now has huge authority, and is a powerful check on the administration. If Britain had a CBO then Brown would not be able to lie through statistics so much. The Tories genuinely regard the OBR as a shift in power, removing the ability of the government to vandalise the public finances (and conceal debt) to the extent that Brown has done.

Crucially, the OBR would be responsible for telling the government when it needs to start repaying the debt. Mervyn King yesterday argued for prompter repayment—in the Tory era, we will have an OBR saying “quite right, and here is what we demand of the government.” It would be apolitical, and would not specify if these cuts were to come from extra tax or lower spending. It may (I hope) produce a model for dynamic tax forecasting – thus giving a realistic assessment of the options available to the Treasury. At present, HMT does “ready reckoners” which don’t account for the fact that higher taxes lower the incentive to work. The Treasury is programmed with false, zero- sum, high-tax logic. The OBR has the potential to take a real-world view of taxes – and hopefully a Tory Treasury will too.

Who would do the talking? Sir Alan Budd has been advising the Tories on the OBR, and I suspect that he may well end up chairing it (although other candidates are in the frame). So when the OBR speaks, the Chancellor will respond - in the Budget. That will set out a general spending envelope. Then, the Tories will start to work out who will eat the cuts.

To me, this is very significant in that it implies that after nearly a decade and a half of one, unanswerable man spending the country into oblivion, ably assisted by a constant stream of over-promoted and under-qualified, low-grade ministers given entire departments to play with, that game is over. No longer will ministers be beaten into submission by an all-powerful Chancellor/PM, it seems. And no longer will the Chancellor/PM be able to do such a thing even if he was corrupt enough to be so-inclined if this new quango really will have the kind of power the Tories claim.

However, surely there are constitutional issues involved, which Nelson does not discuss, preferring instead to continue revealing details of the Tory proposals, which, he says, are almost certainly going to be implemented. But the constitutionality of this OBR quango is an issue that must be explored. An elected Prime Minister is also First Lord of the Treasury and he appoints his Chancellor to run the country's finances, who is also (but not necessarily) elected to the House of Commons. At least with this arrangement it can be argued that, however superficially, the will of the people in the area of state expenditure is represented. The same cannot be said were Prime Minister Cameron to go ahead and create this committee, appointing unelected, paid experts ostensibly to oversee the government's performance in the area of budgetary management (presumably in a similar way to the Bank of England's oversight of monetary policy).

In fact, this body, assuming it has powers of censure, will have more authority than, possibly, it is within the gift of the elected guardian of the nation's treasure to cede. But without Cameron giving-up that authority, then the new organisation will be toothless rendering the proposal as little more than a political move to deflect some of the blame for budgetary errors away from the government ("Ah, but, the OBR said this. We did what they said so don't blame us that it's gone wrong." And so on). Clever, but dishonest. Rest assured, it is something the Left will seize upon with typical, breathtaking hypocrisy.

For myself, I agree with the idea in principle. Anything that can restore the reputation of government and parliament and offer genuine transparency and scrutiny after the utter disasters of the Brown years must be a good thing. But I do believe this new proposal for a new uber-quango must be examined from a constitutional standpoint before it is created, and it must be proved to me that it is not just a stunt.

Incidentally, there is one other 'constitutional' issue worth mentioning: how will this affect the 'authority' of the supra-national EU budgetary committees, one wonders? It seems to me there might well be a very wily ulterior motive for the creation of the OBR: to limit the influence and interference of EU policymakers in UK spending plans. In other words, this is Cameron and Osborne's way of cocking a snook at the interventionist Eurosocialists.