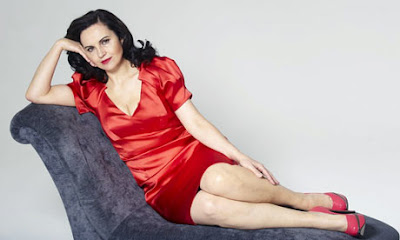 In the middle of Brown's most muddled and desperate press conference yet, in which he once again revealed his strange concept of 'taking responsibility', the news flashed up on Sky that Caroline Flint has said she's quitting.

Didn't she say she backed him yesterday? I guess she's seen the results.

Train wreck. He's quivering as he speaks and as events overtake him.

And guess who's replacing her as Minister of Europe: Glenys Kinnock.

==Update==
Caroline Flint's resignation letter is a bit of a hissy fit: "You treated [us] like little more than female window dressing (see above)."; "You have a two tier government: your inner circle and the remainder"; and so on.

Ouch. Sounds like the double-cross was put on her.

But Glenys Kinnock. I just can't get past that information. It's just too dreadful to contemplate. Plus the fact that we now have seven unelected ministers in our government. Including Mandelson, whose empire is now larger than Prezzer's was. Whatever his many, many, many faults, at least that fat fool had a mandate.

Brown doesn't do elections. Looks like he's not too bothered about democracy generally, either. He's a demagogic tyrant.
==Update2==
Flint's letter in full:

I believe the achievements of the Labour Government to date have been monumental and you have played an immense part in the creation of those achievements.

However, I am extremely disappointed at your failure to have an inclusive Government.

You have a two tier Government. Your inner circle and then the remainder of Cabinet.

I have the greatest respect for the women who have served as full members of Cabinet and for those who attend as and when required. However, few are allowed into your inner circle. Several of the women attending Cabinet – myself included – have been treated by you as little more than female window dressing. I am not willing to attend Cabinet in a peripheral capacity any longer.

In my current role, you advised that I would attend Cabinet when Europe was on the agenda. I have only been invited once since October and not to a single political Cabinet - not even the one held a few weeks before the European elections.

Having worked hard during this campaign, I would not have been party to any plan to undermine you or the Labour Party in the run up to 4 June. So I was extremely angry and disappointed to see newspapers briefed with invented stories of my involvement in a “Pugin Room plot.”

Time and time again I have stepped before the cameras to sincerely defend your reputation in the interests of the Labour Party and the Government as a whole. I am a natural party loyalist. Yet you have strained every sinew of that loyalty.

It has been apparent for some time that you do not see me playing a more influential role in the Government. Therefore, I have respectfully declined your offer to continue in the Government as Minister for attending Cabinet.

I served six years as a backbencher and, therefore, I am not unhappy to be able to devote myself to promoting my constituency’s interests and to support the Labour Government from the backbenches.

This is a personal decision, which I have not discussed with colleagues.